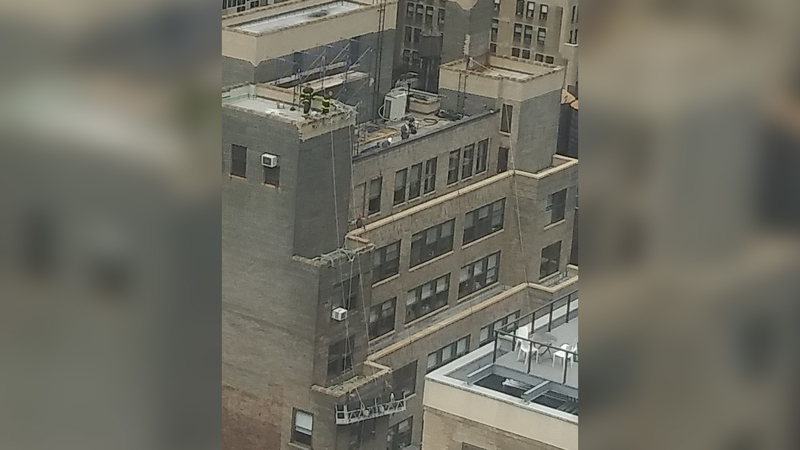 The scaffold somehow came loose, sending bricks from the facade crashing down onto the sidewalk and sidewalk shed while the workers dangled.

"They were just holding on," witness Gregory Jackson said. "They were holding on until the firefighters came."

A 43-year-old man and a 51-year-old woman were struck, and both suffered minor injuries to the legs.

"I heard a big boom and it was very loud," witness Patrick Nrecaj said. "When I came out, I see people running away and a lady was bending like this, her foot was bleeding."

They were treated and released from area hospitals.

The workers on the scaffold were not injured, but they were left dangling from the scaffolding until they could be rescued and the apparatus secured.

"We seen this scaffold lean this way and stuff sliding off, but I couldn't see the floor, if anything was hitting the floor," Jackson said.

Ryder Schumacher is part of a film crew working on 39th Street, and a man on that team was unloading equipment from his truck, parked right in front of the building, when the bricks started falling.

"It was scary," Schumacher said. "I really didn't know what was happening at first, but I heard theses loud crashes."

The worker wasn't hurt, and the FDNY credits the sidewalk shed.

"That's why the shed is there," Battalion Chief Tom Lapolla said. "It's actually to protect in case something (falls). It could have been worse without that shed."

Officials from Department of Buildings responded to the scene, and the preliminary investigation determined that pieces of a parapet wall coping stone from the 18th floor were dislodged from the building by a suspended scaffold rig and hit the sidewalk shed below, before bouncing off and striking the two pedestrians at street level.

A vehicle parked on the street was also damaged.

As a result of the incident, the DOB issued a partial stop work order and issued six violations to the contractor for failure to safeguard the site and failure to properly use the suspended scaffold.