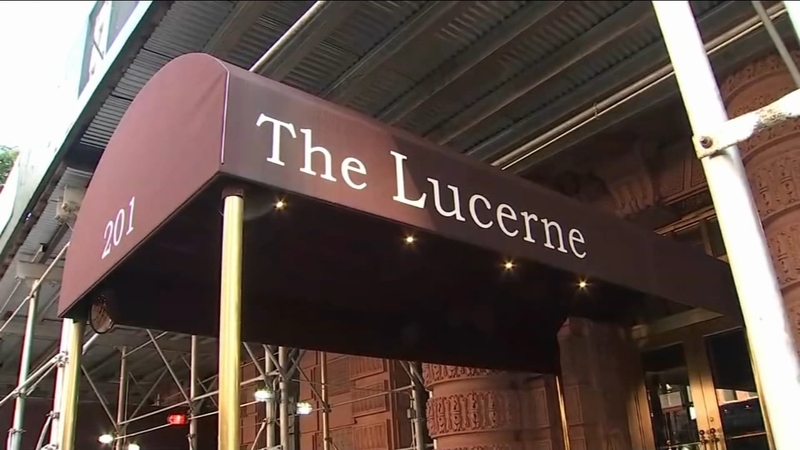 UPPER WEST SIDE, Manhattan (WABC) -- After months of controversy, a hotel on the Upper West Side will no longer house homeless New Yorkers amid the COVID-19 pandemic.

On Tuesday, the Department of Homeless Services said the city will cease all operations at the Lucerne hotel, as well as another one in Queens. Residents will be relocated to alternate shelters.

Thousands of homeless people were being housed in hotels on the Upper West Side of Manhattan amid the coronavirus pandemic, over worries of the threat COVID-19 causes for residents in shelters.

In July, the city took over The Lucerne Hotel at 79th and Amsterdam and turned it into a temporary shelter for nearly 300 homeless men.

Residents had previously said that the influx of homeless people in their neighborhood was ruining the quality of life on the Upper West Side.

Community advocate Dana Lowey Luttway said the welfare of her neighborhood quickly plummeted when the Lucerne joined two other hotels in the neighborhood to house homeless. Neighbors reported seeing drug deals, public urination and even prostitution as the homeless population expanded without the services they desperately need.

"They're not getting it here," Luttway said. "They're getting it in an number of other facilities and shelters that we have coexisted compassionately with for years and and years. The Lucerne is what tipped the scale."

News of the move came as a shock to Edwin Hernandez who has been staying at the Lucerne and doesn't know where he will go next.

"Do I worry? You better believe I worry.," Hernandez said. "I worry about they gonna put us in the place where everybody was exposed to COVID-19."

Attorney Randy Mastro spoke out Tuesday on behalf of the West Side Community Organization and said they appreciate the city is taking action to "address the chaos that reached a crisis point over the past several weeks when the city relocated hundreds of homeless individuals into the Lucerne Hotel, many of whom suffered from mental illness, addiction and other serious problems."

He said it is a huge step forward for all concerned and said the city has further committed to cease using the Hotel Belleclaire for such housing in the next wave of closures.

"While there is still more work to be done to repair the damage to this neighborhood and to address the many homeless individuals still left adrift at other SRO hotels, we are gratified that the community is being heard and concrete action is being taken to remedy this tragic situation," Mastro said.

A spokesperson for the Department of Homeless Services released the following statement:

"As we have said, our use of commercial hotels to combat COVID is temporary, and as part of our effort to continually review and streamline the footprint of our shelter locations, while always ensuring effective provision of services, we're beginning to relocate individuals from several commercial hotel locations to alternative non-congregate shelter locations, where we can continue to implement social distancing and provide isolation. With more than 60 commercial hotel locations utilized to combat COVID and protect our clients from this virus over the past nearly six months, these actions will begin to reduce that footprint where we can-and we are continuing to closely monitor health indicators with DOH, to determine when and how all of our clients who are residing in these temporary emergency hotel relocation sites citywide can safely return to shelter."

At the height of the pandemic, the city relocated nearly 10,000 homeless people to more than 60 hotels citywide.

The city will not say where the people at the Lucerne will end up going, but they will move out by the end of the month.