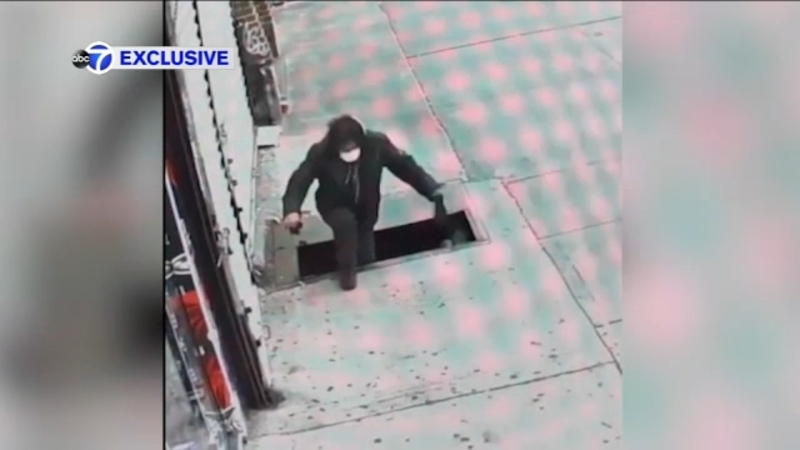 HARLEM, Manhattan (WABC) -- A man is retelling his frightening story after he fell through a metal cellar door while walking down the street in Harlem.

Luis Feitan experienced a classic New York nightmare. In video obtained exclusively by Eyewitness News, you can see a cellar door collapse beneath him, sending him bouncing off the other door, and plunging to the basement below.

A month later, Feitan's body is broken, with severe injuries to his shoulder, back and legs.

Ghislaine Maxwell, a British socialite charged with recruiting and grooming teenage girls to be sexually abused by Jeffrey Epstein, was found guilty. Sonia Rincon has the latest.

He's convinced someone, up above, saved him when he landed down below.

"It's impossible really to be less at fault for your injury than Luis was here," Feitan's attorney Josh Blane said.

Blane says while his client can't work, his medical bills are mounting.

The cellar door sits in front of an old pizzeria at 139th and Broadway, a storefront turned vacant during the pandemic, in a building riddled with city violations.

That including a $6,200 fine after Feitan's accident on November 28.

"It's a ticking time bomb. It was left unattended, especially now during COVID when you have a lot of empty storefronts, landlords are not necessarily paying close attention to some of these decaying grates or doors as they should be," Blane said.

City records show the building is owned by a limited liability company called Maxrem Realty and managed by a company called Solar Management. Neither of which Eyewitness News could reach Wednesday night to answer for Feitan's devastating fall.

A month later, the grate has been replaced -- welded shut.

It's like the incident never even happened, but the nightmare's only now beginning for Feitan, who's certain to face a lifetime of trauma.