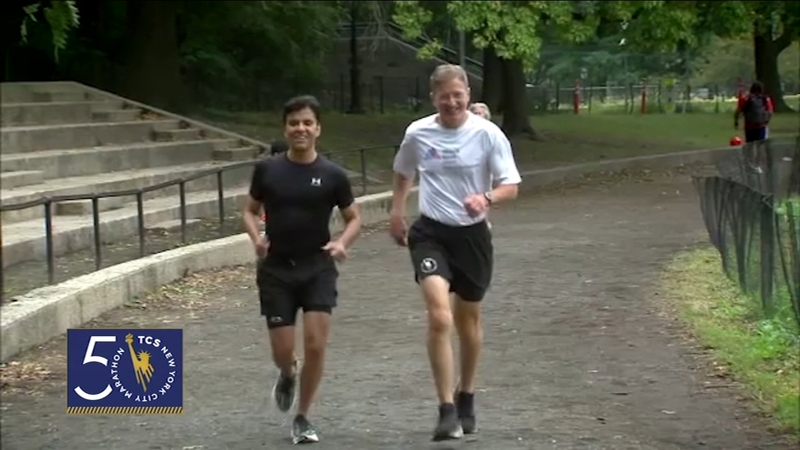 Man running marathon with surgeon who saved him

On Sunday, he'll run the 2021 TCS New York City Marathon with the heart surgeon that helped save his life.

Costa was running along the Hudson River when he collapsed and doctors say for a few minutes he was clinically dead.

"I have no recollection, actually. They say that I just collapsed," Costa said.

Some passing cyclists began CPR, responding EMTs got him quickly to Mount Sinai Morningside and into the care of Dr. John Puskas, chairman of the Department of Cardiovascular Surgery there.

"It gives them artery grafts instead of vein grafts from the leg, so there's no incisions in the legs and the artery grafts tend to last much longer than the vein grafts. So, for a very young man like Mr. Costa, who literally wants to run marathons for years, this new plumbing on his heart is durable," Dr. Puskas said.

Verissimo made a full physical recovery but mentally struggled with fears of another heart attack.

Dr. Puskus, himself a runner, again came to the rescue again as the two hit the pavement together, building-up Costa's confidence.

Now, they're training for the New York City Marathon.

"I can't even put it into words, it's so amazing and I'm so grateful to everybody," Costa said.

"We did 15 miles together a couple of weekends ago. We ran from here all the way down to the Battery and back and he's gonna be just fine," Dr. Puskas said.

Also making sure of that is their running coach, John Garlepp.

Back in 1967, the now 84-year-old won the race that later became known as the New York City Marathon.

He also happens to be another of Dr. Puskas' grateful bypass patients.

Now, they're all preparing to tackle 26.2 miles together.