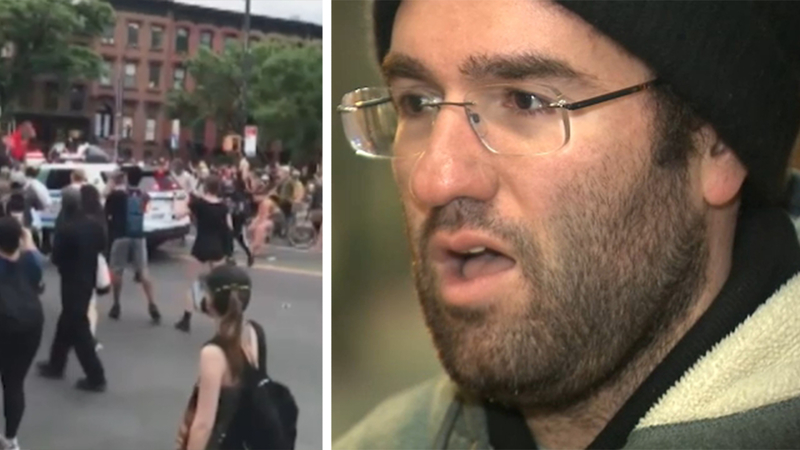 BROOKLYN, New York (WABC) -- There is new fallout after an NYPD officer drove into a crowd of protesters this spring and one man is speaking out about his plan to sue police.

It was a tense scene during the height of the George Floyd protests when a crowd of demonstrators surrounded an NYPD SUV while hurling bottles and other objects at cops.

The incident unfolded as one police vehicle was up against a barrier in the middle of the street before a second police SUV then drove into a crowd of protesters.
EMBED More News Videos

Aaron Ross, of Sheepshead Bay, is alleging police brutality and says he was struck by one of those vehicles and he is now terrified of cops.

"It was terrifying, I honestly was afraid for my life," Ross said.

After the incident, Mayor Bill de Blasio said the officers were surrounded and had to get away, but he found the incident troubling.

"I didn't like what I saw one bit, I did not want to ever see something like that, I don't ever wanna see it again," de Blasio said.

A law enforcement official at the time said the officer hit the gas after realizing a flaming bag was on top of the vehicle.

Nora Constance Marino is Ross' attorney. She has filed a notice of claim.

Last week, a report by the Department of Investigation blasted the NYPD for how it responded to those protests.

The truck, Engine 254, collided with a Mercedes at the intersection of Avenue U and East 4th Street at around 11:30 p.m. Sunday. The truck then slammed into the Coquette Kids cloth

The report said the NYPD lacked a clearly defined strategy and that officers used excessive force that contributed to heightened tension.

The report also found the department deployed officers who lacked sufficient training on how to police protests.

Police Commissioner Dermot Shea said the DOI report on NYPD's response to protesters in the spring "pointed out some things that we can look at internally here."

The report claimed the NYPD failed to coordinate with its own Community Affairs Bureau, which could have talked with protest leaders to tamp down violence.

But Shea said Community Affairs officers were on the front lines the first night of protests at Barclays Center, "getting pelted by fireworks and bottles."

"I think we had close to 500 officers injured, quite severe injuries, we had officers shot at, stabbed, we had officers run over by cars, Molotov cocktails, bashed over the head with things, it was a difficult period all the way around," Shea said.

She said that while he has been supportive and has defended many of the department's actions, he thinks "we have to take a look to improve where we can."

Ross says he heard no warning from police and he didn't even see the SUV coming.

An NYPD spokesperson says it will review the lawsuit if and when the department is served.