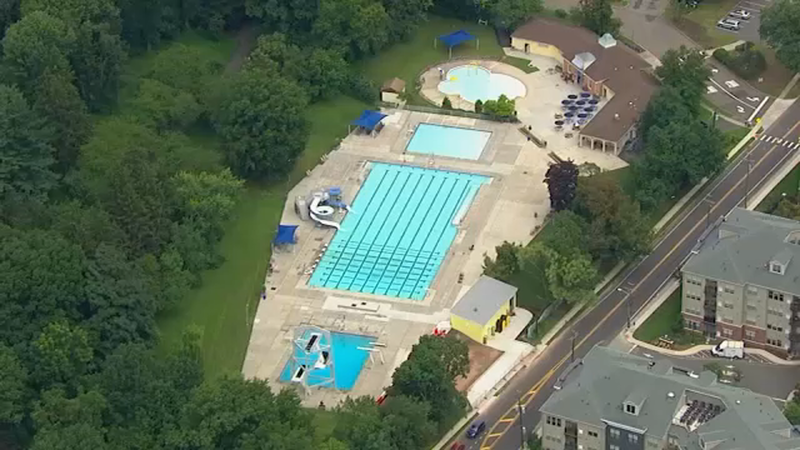 MAPLEWOOD, Essex County (WABC) -- Officials say the public swimming pool in Maplewood Township is back open Monday after an incident over the weekend that parents say sickened some children.

Several parents posted on Facebook Saturday night and Sunday morning that their children had to go to the emergency room after the incident at the community pool Saturday afternoon.

A malfunction with the pool's water level system pushed a toxic amount of chlorine into the air, causing the water to turn greenish brown. The incident was accompanied by a strong odor.

According to parents' social media posts, some children were vomiting, had burning eyes and/or throats, and were lethargic. Others were coughing and some suffered respiratory issues.

One parent said that her child had to spend the night in the hospital.

Burris said it was her youngest who spent the night in the hospital after doctors said his lungs were severely aggravated.

"They found an irritation on my youngest son's lungs so the reason they kept us overnight was to...between the irritation on the lungs that they found and the vomiting, they were worried that it might turn into pneumonia," Burris said.

The township released a statement Sunday that said:

"As previously communicated, a malfunction occurred yesterday afternoon at the pool resulting in a sediment release. This malfunction was within the filtration system and it is being monitored on a regular basis.


As a result some experienced a sudden smell of chlorine as the filter was restarted. We deeply apologize that this malfunction occurred and we are working with a third-party vendor, CFM, on testing and a retrospective evaluation regarding yesterday's malfunction.
In addition, our health officer has contacted the families impacted by the malfunction and we will work with them."

The statement went on to say the problem has been corrected, and that monitoring shows the pool is safe again for swimming:

We have worked closely with a third party contractor and have specifically identified what occurred and we know why it occurred. Furthermore, we have taken all the necessary steps to fix the problem and we have been assured that based on the contractor's actions and our follow up procedures this will not happen again.

As a result the pool will be open today and we will increase the number of our daily standard tests and monitoring to ensure the safety of all residents and patrons.

Again we apologize that this malfunction occurred yesterday (Saturday)."


The town of Maplewood had a third party come in to test and monitor the system and local nurses have reached out to families impacted by the leak.

"We're doing what we need to do from a professional standpoint to monitor all the filtration system mechanisms to make sure it's safe and we're confident that it's safe," said Maplewood Town Administrator Jerry Giaimis.

The pool did reopen Sunday and city officials say some 700 residents came out to enjoy the town pool.

One person was injured in a drive-by shooting in Fliushing on Sunday.