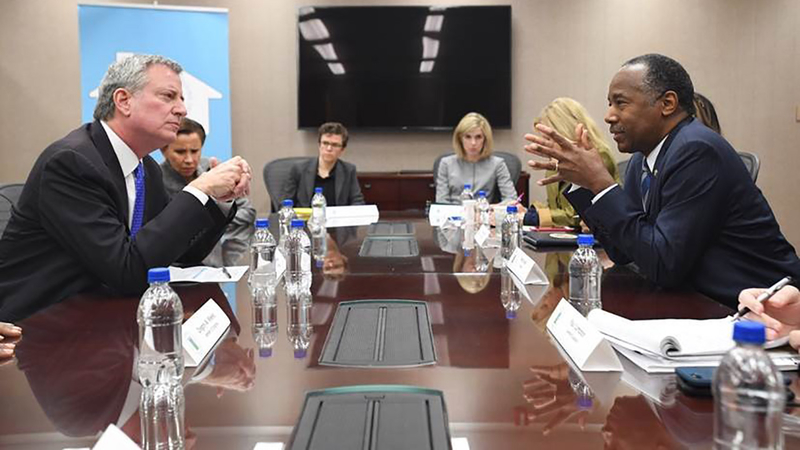 The visit was planned after NYCHA officials got caught lying about their lead paint problem. Now, Carson has threatened a federal takeover if the city doesn't get its act together with a new plan by January 31.

Derick Waller reports on the meeting.

Rev. Alphonso Bernard, a former religious advisor to President Trump, also joined in the tour. Carson didn't say much as he left, but said he expected good things to eventually happen at NYCHA.

Later in the day, Carson met with the mayor privately at federal offices in Lower Manhattan. Three Democratic congressmen were also in the meeting, and afterward everyone said the meeting was a pretty good one, and they are moving toward a settlement.

"The key decision makers are talking face to face to try and solve the problem," said de Blasio. "That's pretty damn important. The members of Congress are here to make sure we move this agreement along."

"He took a look at the boiler system, asked questions, what is it going to take to turn this around," said Rev. Bernard. "You've got to gather as much information as possible. This is an old broken system that has to be addressed."

Tenants have complained for years about problems in NYCHA housing. About 400,000 people live in NYCHA apartments and if the mayor can't reach an agreement with the feds, they could possibly take over the troubled program.

Friday night, HUD and city officials issued a joint statement to a federal judge overseeing the court case, saying they continue to work together.

The city says it's improving training so employees can recognize and remove lead paint, and it's educating 400,000 residents on how to keep their children safe.

Mayor de Blasio said he also has a plan, dubbed NYCHA 2.0, to invest millions, renovate apartments and fix the heat.

Meanwhile, the regional HUD administrator, longtime Trump family employee Lynne Patton, wants to get a firsthand look. She plans to spend a month living in the Grant Houses in Morningside Heights, a building that's been plagued with heat problems.

The city says a federal takeover would be the worst outcome, especially since other cities that have done a takeover has seen problems get worse.