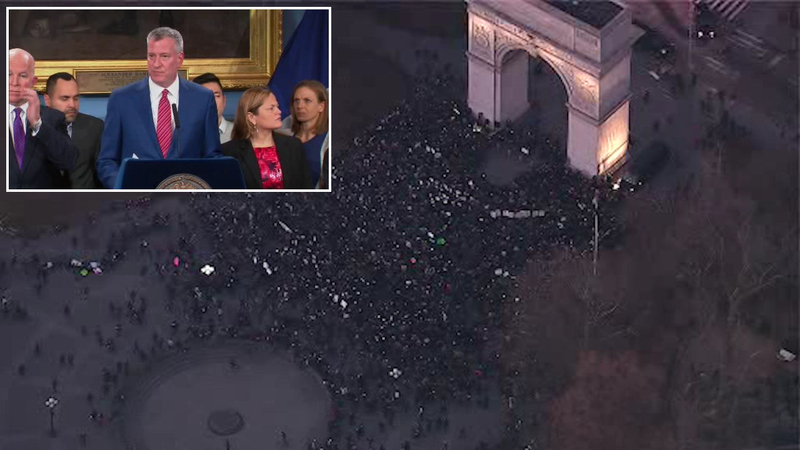 The mayor said that New York City is a city of immigrants and has always been.

He added, "It's important to understand that this order doesn't change who we are...our values or how the city government protects its people."

Mayor de Blasio said that due to the "vague" nature of the executive order, it would be "susceptible to legal challenges and public resistance."
Meantime, an rally for Muslim and immigrant rights was held in Washington Square Park to speak out against President Trump's executive orders.

It began as a press conference by the Council on American-Islamic Relations (CAIR), and turned into a rally with thousands of people in attendance.

Members of the crowd shouted "Lock him up!" in reference to President Trump.

A city of immigrants was in full revolt.

"The fury inside of me is deep. It's burning," one person said.

"Trump's an immigrant, I'm an immigrant," a protester said. "It's fear-mongering is what it is, and it's cheap."

Of course the executive order means consequences for a sanctuary city will be anything but cheap.

But even as Mayor de Blasio insisted New York immigrants will always protected in New York City, he called together his agency chiefs to point out what the letter of the law would really mean.

For starters, he says, immigrants could stop reporting, or helping solve crime, in fear the NYPD might deport them.

And then there's the financial burden: the order threatens to cut more than $100 million of counterterror funds. It is money that protects, among other things, a certain building near and dear to the president's heart.

"The president and his team are going to have to look long and hard at the notion of taking away anti-terrorism funding from New York City," Mayor de Blasio said. "Funding that protects Trump Tower and everyone who works in it and lives in it and visits it."

"He might be willing to do a lot of things, he's not able to do very much," said Zachary Carter, New York City Corporation Council.

City leaders say they'll fight hard in court if Trump cuts a dime in funding to municipal government, but what about nonprofits?

At the coalition for immigrant rights in Inwood, a quarter of its budget comes from federal grants to help immigrants obtain pathways to citizenship.

New York doesn't honor detainment requests from immigration officials unless there's a federal warrant and the person requested may be on the terrorist watch list or committed a serious crime in the past five years.