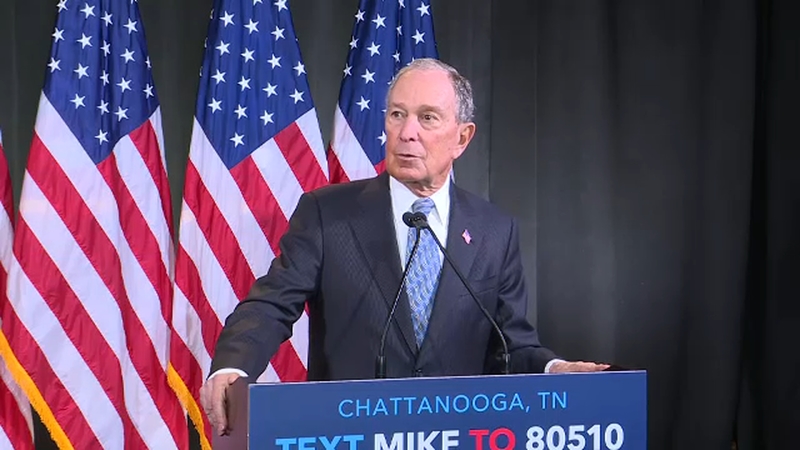 Bloomberg received 19% in the NPR/PBS NewsHour/Marist poll. He needed 10% to qualify.

He came in second after Sen. Bernie Sanders, who has accused Bloomberg of trying to buy the nomination.

Wednesday's debate in Nevada will be the first time Bloomberg joins his fellow candidates on the debate stage.

With Bloomberg's rise in the polls comes new attacks by President Donald Trump.

The two got into a war of words once again on Twitter on Tuesday -- less than a week after a similar exchange.

What Mini Mike is doing is nothing less than a large scale illegal campaign contribution. He is “spreading” money all over the place, only to have recipients of his cash payments, many former opponents, happily joining or supporting his campaign. Isn’t that called a payoff? .....

When Trump accused Bloomberg of illegally buying the Democratic nomination, the former NYC mayor shot back.

Why do you want to run against Bernie so badly? https://t.co/HOnHap4QdL

Bloomberg ended the spat by telling Trump he will see him in November.

"Our campaign is seeing a groundswell of support across the country, and qualifying for the February 19 debate is the latest sign that Mike's plan and ability to defeat Donald Trump is resonating with more and more Americans.

"Mike is looking forward to joining the other Democratic candidates on stage and making the case for why he's the best candidate to defeat Donald Trump and unite the country. The opportunity to discuss his workable and achievable plans for the challenges facing this country is an important part of the campaign process.

"Since Mike launched his campaign 13 weeks ago, he's met with voters in 25 states and 62 cities. Our crowds continue to grow, and our coalition continues to broaden. There's a desire in every corner of this country for a proven leader, for someone who will stand up to bullies and special interests and get things done. That person is Mike Bloomberg, and we look forward to more Americans seeing that on Wednesday night."
Report a correction or typo
Related topics:
politicsnew york citynevadamichael bloombergvote 2020presidential debatedemocratsu.s. & world
Copyright © 2022 WABC-TV. All Rights Reserved.
TOP STORIES
Official admits police made 'wrong decision' in TX shooting
Texas survivor apologized to dad for blood on clothes, losing glasses
Massacre survivor says gunman told them: 'You're all gonna die'
16-year-old arrested after social media threat to shoot up NY school
Former Uvalde school teacher grieves for her mentor, students killed
Bank employees help kidnapped woman after she asks for loan
Summit on missing women and girls of color held in the Bronx
Show More
Bethpage Air Show cancels practice session
2 Long Island beaches close due to high bacteria levels
NYC officials, businesses hoping for post-pandemic summer of tourism
Jersey Shore, businesses prep for busy Memorial Day weekend
NYC beaches officially open to swimmers this Memorial Day weekend
More TOP STORIES News