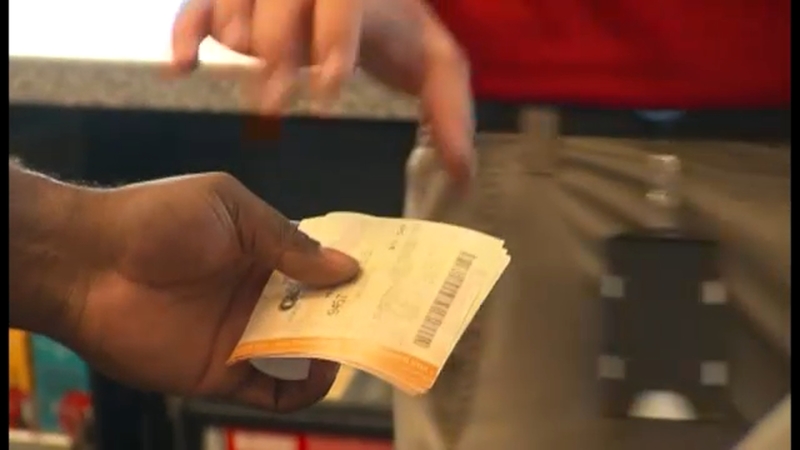 No one is waking up a winner of that massive Mega Millions jackpot.

There's still a chance for many as no ticket matched all six numbers that were drawn Friday night.

However, there was a $2 million ticket sold in New York.

Just after midnight, Jessie James Decker announced which finalist won the payout of a lifetime on "New Year's Rockin' Eve."

The jackpot is now at $600 million for the fourth time ever in history.

Even though no one won the Mega Millions jackpot earlier this week, there are some new millionaires in New York, New Jersey, and Minnesota.

They both had winners with five numbers, but missing the Mega number. The Minnesota and New Jersey winners had tickets worth $1 million each.

The $1 million winning ticket in New Jersey was sold at Masso's Deli & Pizzeria on Lakeview Dr. North in Gibbsboro in Camden County.

A $2 million winning ticket was sold at the Citgo Mart in Middletown, Orange County.

That ticket is worth $2 million because the player utilized the Megaplier option, where for an additional $1 any non-jackpot prize will be multiplied by the Megaplier number drawn.

The odds of matching all five numbers and the Powerball number is 1 in about 293 million, according to the Multi-State Lottery Association. The overall chance of winning a prize is 1 in 24.87.

Mega Millions tickets are sold in 44 states plus the District of Columbia and the U.S. Virgin Islands.

The next drawing is on Tuesday.

The Powerball jackpot grew again to $470 million for Saturday after no one won Wednesday night's drawing. The cash value is $362.7 million. This marks the 10th largest jackpot in Powerball history.

"It's been a couple of years since the games have simultaneously offered jackpots this large, and our players are here for it," said May Scheve Reardon, Chair of the Powerball Product Group and Executive Director of the Missouri Lottery.

This marks the third time that both lottery jackpots have totaled more than $400 million at the same time.

The Powerball game is played in 45 states, the District of Columbia, Puerto Rico and U.S. Virgin Islands.

Eight protesters were arrested at Trump Tower Wednesday night, as NYPD officers were advised to be on alert for potential unrest.