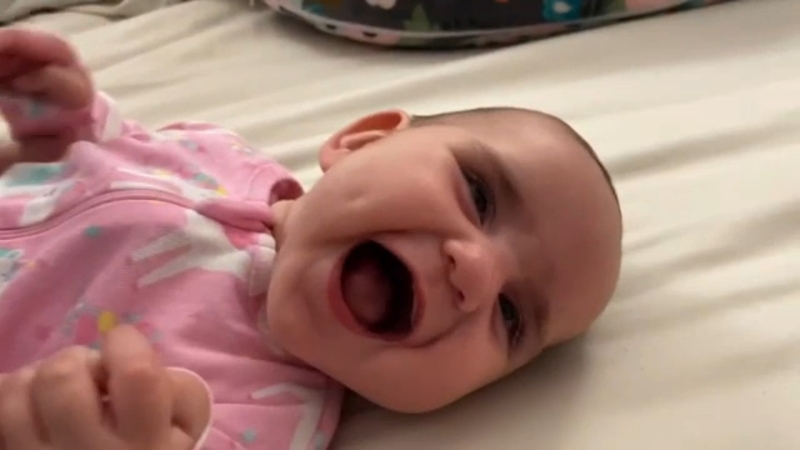 NEW YORK CITY (WABC) -- Doctors at Mount Sinai performed a rare surgery during the height of the COVID-19 pandemic on a baby born with cataracts in both eyes.

Mia Alvarez was just six weeks old when doctors performed the surgery, and now, her parents -- who are legally blind themselves -- are speaking out.

Alvarez, seeing her parents clearly now, has come through a very rare and unexpected time in her young life but is now on the road to recovery.

"I was born with cataracts, my mother had cataracts, it's hereditary," mom Kristal Alvarez said. "But we were hoping that she would not have to deal with that at all."

But she was was born with cataracts in both eyes, and the surgery was in question because it was considered elective in the midst of the pandemic.

"They went further into her eyes, they saw that she had, she was developing the cataracts," dad Alex Alvarez said.

"The fact that she was born with it was a huge deal for the doctors," Kristal Alvarez added.

Her initial surgery at New York Eye and Ear Infirmary of Mount Sinai Hospital was performed by Dr. Douglas Fredrick, a pediatric ophthalmologist.

"The pediatrician was well aware that this might occur, and the pediatrician referred Mia to us the very first day," he said. "So we knew from day one that she had cataracts and something was going to have to be done."

Both Kristal and Alex have vision impairment, but they wanted to make sure Mia would have the best chance at corrected vision.

"If you don't get the cataracts removed from an infant by the first two months of age, then the chance of having normal vision is very low," Dr. Fredrick said.

That was devastating news to Mia's parents.

"That was horrifying to me, because they wanted to do surgery when she was only six weeks old," Kristal Alvarez said. "And they didn't know how she would react under anesthesia."

Then, when she was 2 months old, she had a second surgery.

"We wanted to give her the best life growing up, and the surgery, and we knew this surgery would help," Alex Alvarez said.

While she wears tiny contact lenses, doctor say her prognosis is excellent.

"Fortunately, I think she is going to have a great outcome," Dr. Fredrick said.

"Even with the struggle, knowing how crazy it can be, it was something that I said I would want to do for her," Alex Alvarez said. "It gave her the best chance at the best vision."

"She would have maybe 20/40 vision when she gets old, and that is almost perfect," Kristal Alvarez said, "And we are excited about that."