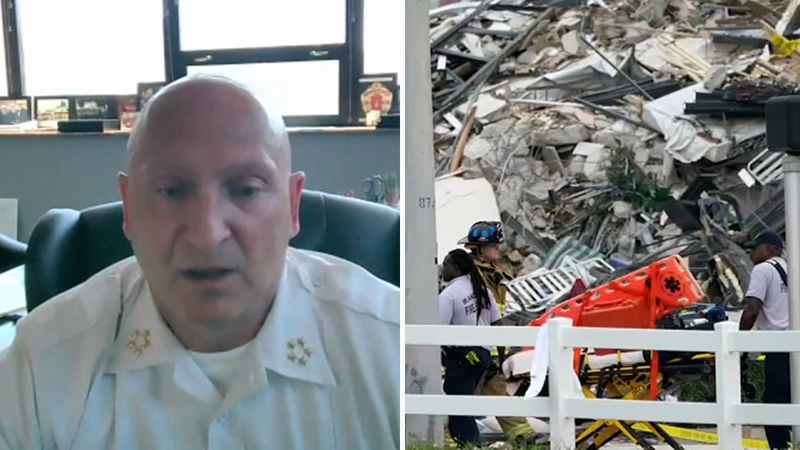 SURFSIDE, Florida (WABC) -- Authorities say nearly 100 people are still unaccounted for after part of a 12-story beachfront condo building collapsed in a town outside Miami.

Rescuers pulled dozens of survivors from the tower Thursday morning and continued to look for more. Officials did not know how many people were in the tower when it fell around 1:30 a.m.

Piles of rubble and debris surrounded the area, and cars up to two blocks away were coated with with a light layer of dust from the debris. As crews went through the rubble around midday, smoke wafted through the area. The source was not clear.

Firefighters are continuing to work on locating possible victims, while dealing with heavy damage and changing conditions in the parking garage.

Eyewitness News spoke with the Jersey City Fire Chief Steven McGill about what crews in Florida are now dealing with.

"They're probably still doing some selective debris removal, they're definitely tunneling in to where voids are and shoring them up as they go, they may have to breach walls where they're going in to reach people, they may have to cut walls or floors open," McGill said. "It's a very labor-intensive operation, you're constantly monitoring the air for any hazmats that may be there."

McGill shared how his department would respond if they had received the call and he also explained why the building's swimming pool could complicate the search.

Fireman Vinny Torre is with Jersey City's Rescue One and has trained on building collapse rescues most of his career. He says the biggest risk rescue workers face is the unstable rubble they are walking through.

He showed Eyewitness News some of the gear that is likely being used in South Florida, first to shore up areas of still unsettled debris and then to rip through concrete.
EMBED More News Videos

Fireman Vinny Torre showed Eyewitness News some of the gear that is likely being used in South Florida, first to shore up areas of still unsettled debris and then to rip through concrete.

Officials said they will work through the night looking for survivors.