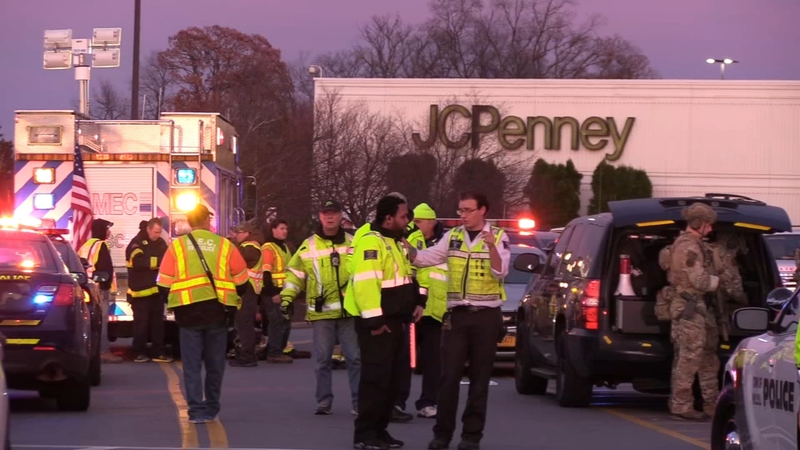 MIDDLETOWN, New York (WABC) -- A mall in Orange County, New York, reopened Monday as police search for the man who fired a gun into the floor, injuring a mother and her 12-year-old son.

The gun went off shortly after 3 p.m. Sunday at the Galleria at Crystal Run in Middletown, about 70 miles north of midtown Manhattan.

Police say a man fired on the second level of the mall.

A 49-year-old woman and her son suffered minor injuries after being hit by either debris or a ricocheted bullet.

Police officers helped panicked shoppers get out safely. The shooting occurred on one of the busiest shopping weekends of the year.

Watch raw video showing the scene of a shooting inside a mall in Orange County, New York.

Police on Monday are still trying to determine if the incident outside an American Eagle clothing store on the mall's upper level was intentional or an accident.

"Within 30 seconds troopers came through the AMC doors and the first thing they told us was, a shot is heard and you need to get out right now," said one merchant at the mall. "We just saw everybody screaming coming out 'shots are heard, shots are heard, you need to run to the parking lot.'"

Leighton Peterson was grabbing a pre-movie bite to eat in the mall's food court around 3:20 when suddenly, he heard alarms, "and all of the employees were telling everybody to get to the exits and evacuate," he told The Associated Press.

As people made orderly progress toward the exits, Peterson thought it might be a fire drill until he heard a worried-looking mall worker mention a shooting, he recalled.

Outside, holiday shoppers lingered at first to see whether there might be an all-clear and reopening. But before long, "it became pretty clear that there was an actual situation happening, so then people started leaving en masse," in a bumper-to-bumper stream out of the packed parking lot, said Peterson, 32, a video editor.

The Galleria mall also was evacuated during the holiday shopping rush in December 2008, when an odor of gas at a department store forced the shopping center to close early on a Thursday evening.