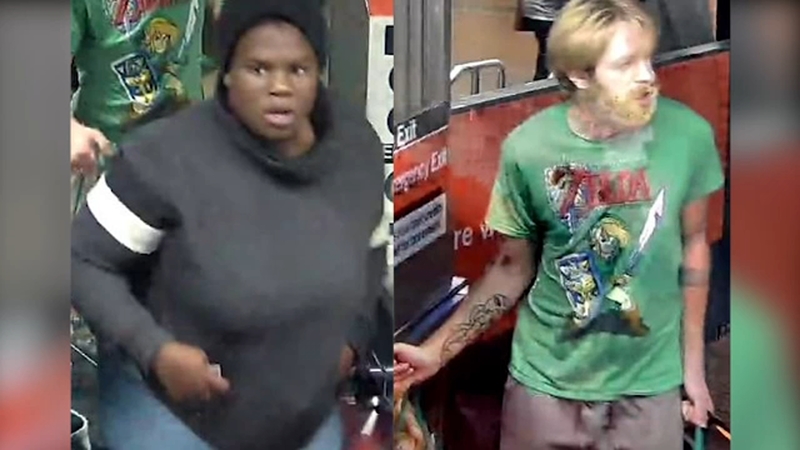 MIDTOWN MANHATTAN (WABC) -- Police are searching for two suspects after three women were punched in the face and robbed in separate violent encounters in Manhattan.

A 24-year-old woman was walking when she was approached by a man and woman.

The woman punched the victim in the face before they both removed the victim's purse and fled eastbound on 26th Street.

The victim suffered pain and bruising but refused medical attention at the scene.

Then just the following day, police say they struck again just after midnight. It happened inside of a building on West 21st Street.

A 30-year-old woman was walking when the woman punched the victim in the face, took her purse and fled in unknown direction.

"We heard a lot of noise and then somebody yelled what the 'blankety, blank' is wrong with you," said witness Gina Moss.

Moss heard the commotion in the stairwell of her building in the middle of the night and came across her neighbor in need of help.

"Grabbed her and pulled her down half a flight of stairs and emptied her bag and ran out," Moss described.

The victim suffered pain and bruising but refused medical attention at the scene. Her purse contained a cellphone, cash and credit cards.

"The perpetrator at that point had already been running down the stairs and running away," said neighbor Matthew Kalinowsky. "It kind of just makes you reconsider going that extra step if you're walking into a building and someone is coming in behind you, don't assume they live with you."

The most recent incident happened on Monday, September 16th inside the 42nd Street Subway Station at 3:07 p.m.

A 48-year-old woman was riding aboard a northbound #4 train when she became involved in a verbal dispute with the man and woman.

The woman punched the victim in the face, they took the victim's purse and fled when the train doors opened at the Grand Central Station.

The victim suffered pain and bruising but refused medical attention at the scene. The victim was later informed by her bank that her credit card was charged $40 at an ATM and Chick-fil-A.

She did not want to be identified, but spoke out to Eyewitness News on Tuesday.

She said the suspect was sitting on the man's lap and they were saying something about her phone light being on. She said she had earphones in with music on so she couldn't hear.

That's when words were exchanged and the woman snapped.

"She grabbed my hair, pulled me to the ground, clocked me a couple times, blood was everywhere and no one stopped the fight," she said.

The victim said she didn't know there were other victims out there, but she isn't surprised.

"They don't look like they're from New York, they look like they are transients so I wouldn't put it past them that they would have done something like that here," she said.