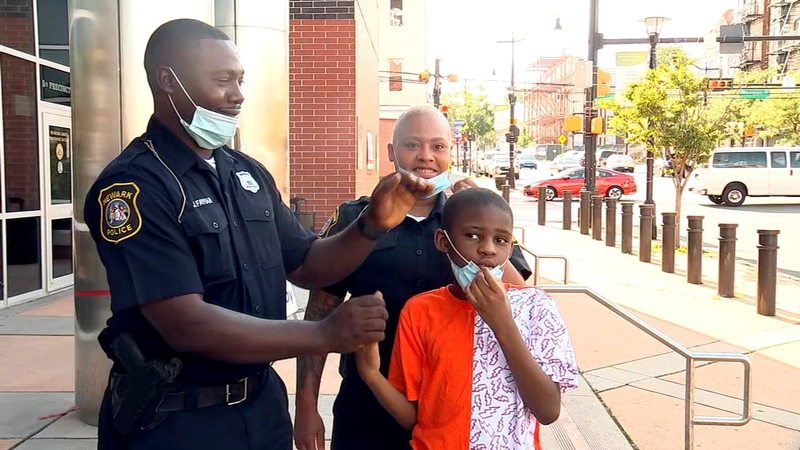 Family thanks officers who found missing child with autism

NEWARK, New Jersey (WABC) -- Parents are thanking the New Jersey officers who found their son, who has autism, after he wandered from his home into a major storm.

"Thank you so much for what you did for him," said Lorie Newton, mother of Aiden Newton. "I don't know what I would've done if something happened to him."

A pair of Newark police officers received a lot of emotional gratitude on Monday night.

"If it hadn't been for you, I don't know what would've happened to him," Newton said.

His mother and her extended family keep close watch over him, but last Monday afternoon, in the middle of a thunderstorm, he disappeared.

Somehow, the young boy escaped out the front door without notice and continued on his way in the pouring rain.

By the time his mother realized her helpless son was gone, she started driving through the neighborhood, frantically calling the police.

That's when she was told he was safe.

Officers Joseph Fayiah and Latina Martin of the Newark Police Department, were called to South 20th Street, where they coaxed Aiden Newton, who was soaking wet and barefoot, into their patrol car, buckled him in and took him to the hospital.

The officers did not need police training for this. They relied on their instincts as parents to comfort the child as one of their own.

It was an act of kindness and sympathy that Aiden Newton's family could not thank enough.

"When I looked at the video and saw how you treated my nephew with sensitivity and kindness and respect, my heart is so grateful to you," Aiden's aunt Stacie Newton said.

The boy does not have a history of running away, but now that he knows how to open the door, if he does leave again, at least there are two more officers who know his name.