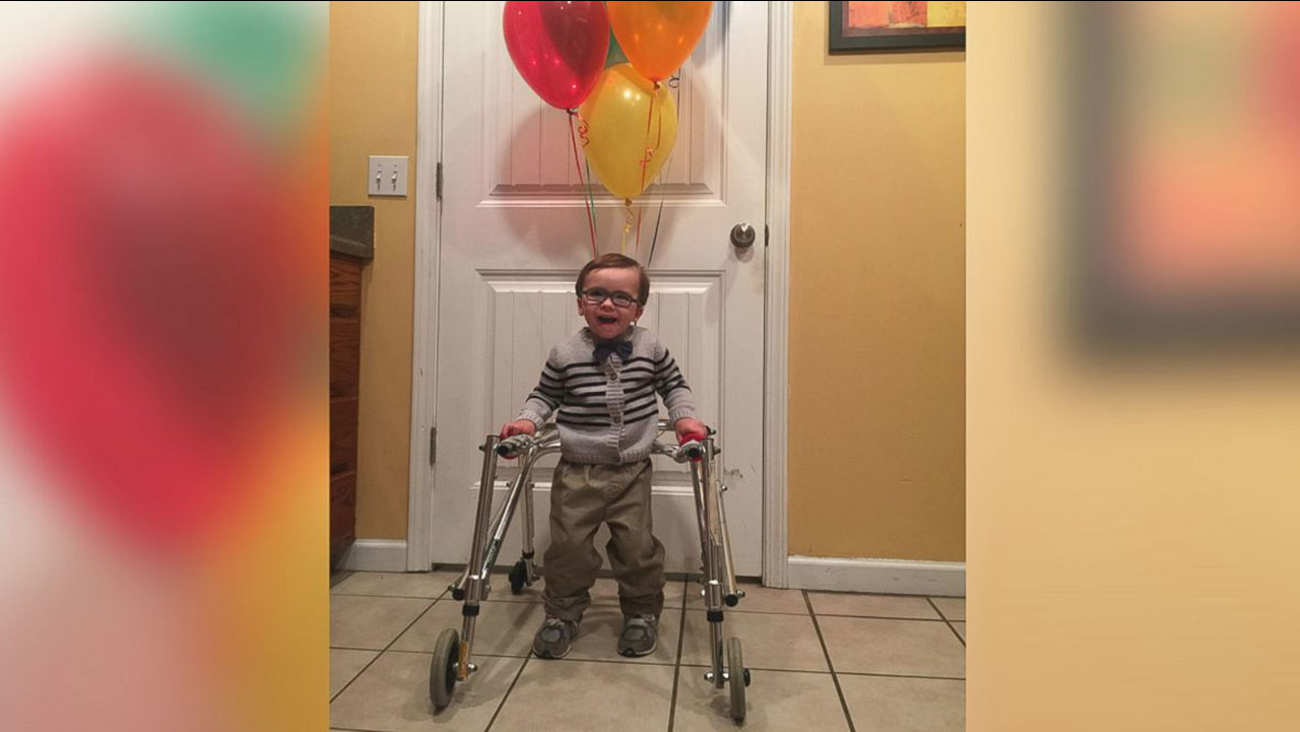 Angler Davis, who uses a walker, is dressed as Carl Fredricksen from Disney's "Up." (Ashley Davis)

LYNCHBURG, Tenn. -- Two-year-old Angler Davis might need a walker to get around, but that's not holding him back this Halloween.

Angler's mom Ashley Davis, of Lynchburg, Tennessee, created this cute costume based on Carl Friedricksen from Disney's 2009 film "Up" to take advantage of the toddler's unique needs.

Davis says that Angler has developmental delays and has difficulty walking, but that the family is working to make him feel like any other kid.

"I think it just makes him happy to be like the other kids," Davis told ABC News. "Our big thing is to not let him feel like he is different. We treat him like a typical 2-year-old."

The family watched "Up" together a few months ago, but Davis isn't sure if Angler quite understands who he's pretending to be.

"I think he realizes that's the guy from 'Up,' but he doesn't realize that's who he's dressed up as," Davis said. "I'll show him and he'll just grin."

Davis says the costume was a cinch to make, since all she had to buy was the balloons. She's looking forward to being even more creative next year, after receiving positive feedback.

"This morning, I was like, 'Oh my gosh, what are we going to do next year 'cause nothing is going to top this," she said, noting that in the future she would love to help come up with costume ideas for children with physical disabilities.
Related topics:
societydistractiondisabilityhalloweencostumes
Copyright © 2022 WLS-TV. All Rights Reserved.
TOP STORIES
Person of interest ID'd after 6 killed, dozens hurt in IL shooting
NYPD increases officers, security ahead of NYC 4th of July fireworks
Macy's 4th of July Fireworks 2022: Everything to know
Where to watch 2022 Fourth of July fireworks
Highland Park parade shooting victims range in age from 8 to 85
Joey Chestnut, Miki Sudo win Nathan's Hot Dog Eating Contest
People enjoy perfect weather at Tri-State beaches for 4th of July
Show More
AccuWeather: Clouds return on Tuesday
2 Long Island beaches reopen after lifeguard bit by shark
Teen arrested in Newark drive-by shooting that injured 9
Child found dead in Wallkill pool, adult in critical condition nearby
Box truck crashes causing parked cars to stack up in Brooklyn
More TOP STORIES News