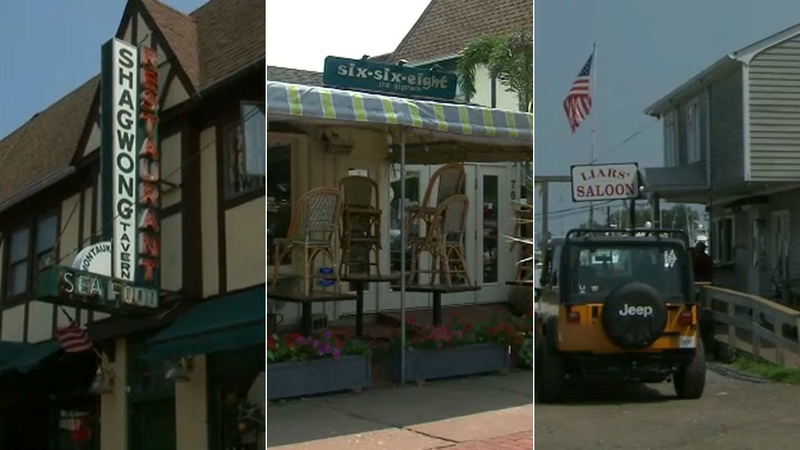 MONTAUK, Long Island (WABC) -- More than a dozen employees of bars and restaurants in the Hamptons have been arrested for allegedly selling drugs out of restaurants and motels.

Officials announced Thursday that 15 people -- including several seasonal employees -- are accused of selling and distributing the drugs.

Authorities say the suspects got jobs at various Montauk restaurant and bars including Swallow East, 668 the Gig Shack, Shagwong Tavern, Liar's Saloon and O'Murphy's Pub. They said some of the men obtained jobs at the restaurants specifically so they could sell drugs.

The drugs -- mostly cocaine and oxycodone -- were allegedly sold out of motels at inflated prices. Some of the drugs were transported through the mail.

The investigation into the drug ring took place over the last month after members of the community raised concerns.

"What this drug crew did is take advantage of the tourism and commercial activity that was going on in the Montauk area," Suffolk County District Attorney Timothy Sini said.

Some drug transactions took place out of the back door of the restaurants where the suspects worked as chefs, bar backs or line cooks, authorities say.

"While there is no evidence at this point to suggest that restaurant owners were directly involved in the scheme, what is clear is that there is a culture of complacency among the commercial establishments in this area," Sini said.

An attorney for Shagwong Tavern said his client knows nothing about any drug activity happening on his property or among his employees.

Janice Kordasz, the owner of O'Murphy's Pub, said no drugs were sold on her property.

"Believe me, that was not going on," she said.

Kordasz said two of her employees were detained Wednesday. She heard the drugs were being sold out of one of their motel apartments.