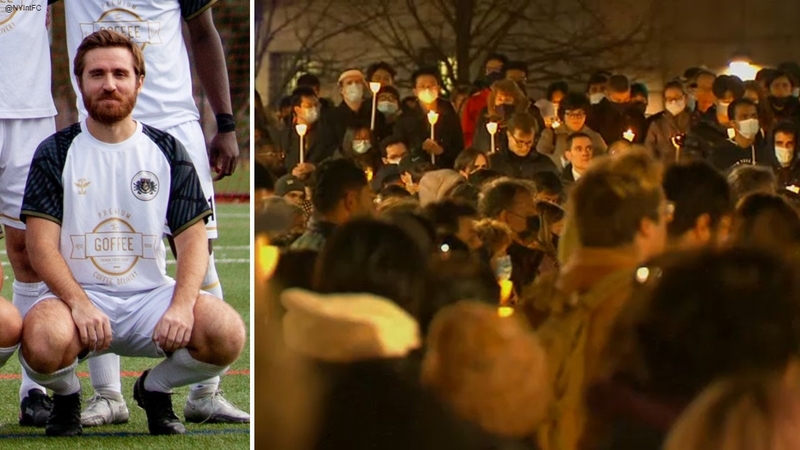 A third person was menaced by the suspect in Central Park when police arrived and made the arrest.

He was pronounced dead at the hospital. Police say Giri, a graduate student at the School of Engineering and Applied Science, lived in Manhattan.

He was also a member of NY International FC, an amateur soccer team playing in the Cosmopolitan Soccer League. He was killed as he walked back to his Morningside Heights apartment after a soccer match.

We are deeply saddened to share that Davide Giri, a @CUSEAS graduate student, was killed in a violent attack near campus last night. A criminal investigation is ongoing. We will continue to share updates, including about gathering together as a community, as soon as we are able. pic.twitter.com/einyHRQ3Hj

About 15 minutes after Giri was attacked, a 27-year-old Italian tourist was stabbed at 110th Street and Morningside Drive.

That victim, who was spending his first day in the city, was stabbed in the torso and taken to St. Luke's Hospital, where he is expected to survive.

Minutes later, a 30-year-old man told police he was menaced inside Central Park

Officers responded and found the suspect, Vincent Pinkney, 25, at West 104th Street and Central Park West on the Upper West Side.

Pinkney was taken into custody with a large kitchen knife. The Washington Heights resident was later charged with murder, attempted murder, assault, attempted assault and criminal possession of a weapon.

CeFaan Kim has the new details in the 1999 Bronx cold-case murder.

Detectives believe he is responsible for both stabbings, but the investigation is in its early stages

He is a reputed gang member last arrested in 2013 for gang assault. He was released on parole five years later.

Police are also investigating an additional stabbing Thursday morning that happened in the same spot where the tourist was attacked later in the day. The 43-year-old man was on West 110th Street when an attacker grabbed him by the neck from behind and stabbed him in the right side of his neck around 12:30 a.m. The victim's injuries were not life-threatening.

The stabbings, on opposite ends of Morningside Park, were certain to rattle the Columbia University community that populates Morningside Heights.

"I try to stay in safe places, places I know are well-patrolled and well-manned," one student told Eyewitness News. "If anything does happen, I try to avoid confrontation."

The community gathered later Friday night for a vigil in honor of Giri. His fellow soccer players were emotional and they were with him just minutes before the attack.

The scenes are not far from where Barnard College freshman Tessa Majors was killed two years ago.

Majors was stabbed several times in Morningside Park by three teenagers during a robbery on December 11, 2019.

In October of this year, one of those teens received a sentence of 9 years to life in prison after pleading guilty in the case.