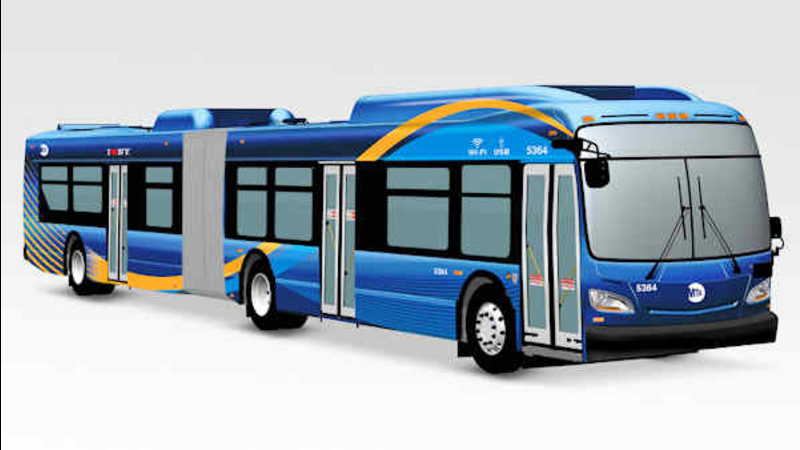 NEW YORK (WABC) -- Governor Andrew Cuomo on Tuesday announced the arrival of the first of 75 new buses that are being deployed into service this year as part of a concentrated effort to address overcrowding and modernize the MTA.

In March, Cuomo announced the addition of 2,042 buses, equipped with Wi-Fi and USB charging ports, to the MTA fleet over the next five years, replacing 40 percent of the current fleet.

The new buses are already starting to hit the streets, with seven buses going into immediate service. The remaining buses will be delivered at a rate of four or five per day, with all 75 arriving this summer and operating in Richmond Hill, South Jamaica, South Ozone Park, Springfield Gardens, Rosedale and Far Rockaway.

Cuomo also announced the success of a field test for MTA eTix, a free app that will allow Long Island Rail Road and Metro-North customers to purchase train tickets anytime, anywhere on their mobile devices, instead of using paper tickets. The LIRR and Metro-North expect to launch the first phase of the MTA eTix app rollout on select lines in June, and the app will be available to all railroad customers by the end of 2016.

"Today, we are reimagining the MTA for the 21st century and creating a transit system that will meet the needs of the next generation of New Yorkers," Cuomo said. "With our unprecedented MTA capital plan, we are building for the future with major initiatives that will improve the commute of millions of New Yorkers, reduce overcrowding and bring new technology to our subways, buses and railroads."

A beta version of the MTA's eTix app has been in the hands of approximately 150 customers who ride the LIRR Port Washington Branch or Metro-North's Hudson Line. During the last few weeks, these railroad customers have been using the app in real-time, buying and displaying train tickets during the course of their commutes.

Both conductors and participating customers have been monitoring the app's performance and reporting any problems they encounter to the app development team in order to ensure that the technology works seamlessly when it is rolled out across the railroads. Preliminary survey results indicate widespread satisfaction with the app.
Related topics:
trafficnew york citymtalirrbusmass transitlong island railroadmetro north
Copyright © 2022 WABC-TV. All Rights Reserved.
TOP STORIES
Security incident at JFK Terminal 4 cleared
1 killed, several injured in shooting at mechanic shop in NYC
Several dead in Copenhagen shopping mall shooting
2 Long Island beaches closed after lifeguard nipped by shark
Where to watch 2022 Fourth of July fireworks
Macy's 4th of July Fireworks 2022: Everything to know
2 friends shot in cab on the way home from concert descibe incident
Show More
No serious injuries after minor gas explosion in NYC pizzeria kitchen
AccuWeather: Mostly sunny and nice
Jayland Walker was unarmed when 8 Ohio officers opened fire on him
GOP's Ted Cruz feuds with Elmo over kids getting COVID-19 vaccines
Liz Cheney believes prosecuting Trump for Jan. 6 is necessary
More TOP STORIES News