Judge: Lawsuit against MTA over lack of subway elevators can move forward 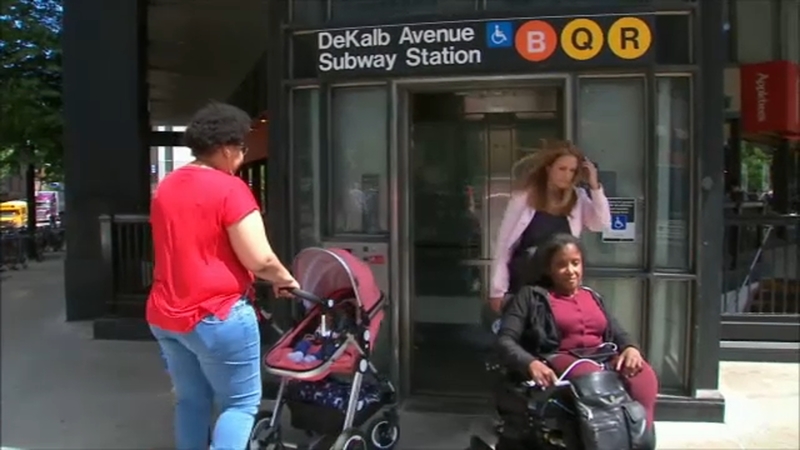 NEW YORK (WABC) -- A judge ruled Wednesday that a class-action lawsuit against the MTA over a lack of elevators in the subway system can move forward.

Advocates were eager for their day in court, while the city and MTA hoped the judge would dismiss the case.

Demonstrators held another protest outside the courthouse, just as they did a few weeks ago before the last hearing.

"We can't get to work, doctor's appointments, shopping or social and cultural events quickly and on demand like everyone else," activist Monica Bartley said. "Subway elevators would benefit everyone: Seniors, pregnant mothers, parents with strollers, and people with luggage."

They insist the MTA is in violation of the New York City Human Rights Law, and they are demanding that the MTA be forced to comply.

The judge had already made it clear that he believes the transit agency should make transportation accessible to all.

Right now, only 25 percent of subway stations are accessible to those with disabilities, and advocates say those elevators often don't work.

The MTA said it has funding in place to make 24 additional stations accessible and plans for an additional 50 by 2034.

With congestion pricing now added to the budget, advocates are hoping Wednesday's ruling will force will the MTA to use additional funds for accessibility and not other initiatives.

The MTA issued the following statement after the ruling:

"We are disappointed with the ruling and are considering our options for appeal. The MTA is deeply committed to improving accessibility at a faster rate than ever before -- including the goal of making 50 more stations accessible in the next capital plan, ensuring that no rider will be more than two stops away from an accessible station at any time. We are also committed to increasing the speed and quality of our fully accessible buses completely envisioning the network for the first time since its creation. We know we have a long way to go, but we are fully committed to making this system one that can be used by all New Yorkers."