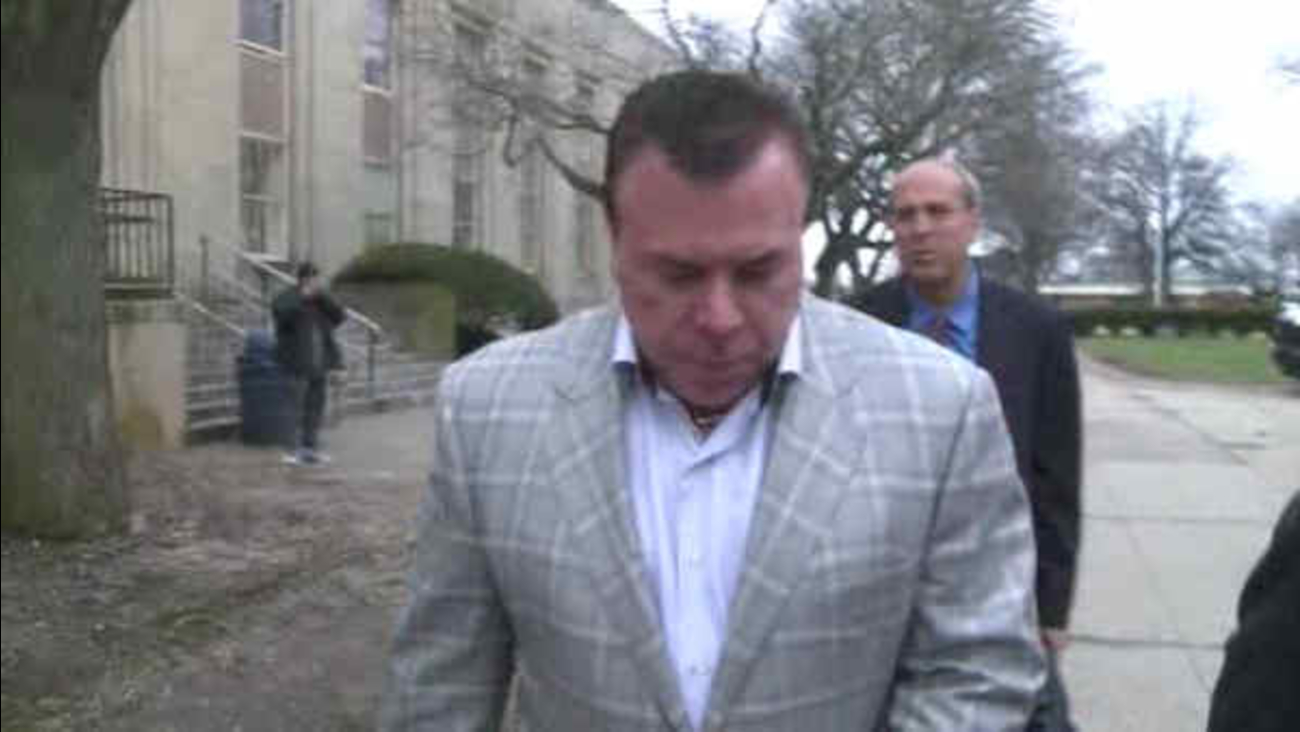 MINEOLA, N.Y. (WABC) -- A cardiologist from Long Island accused of having another doctor's office torched before hiring undercover officers to have him hurt or killed was back in court Monday as a grand jury announced new charges in connection with the case.

In addition to arson, burglary and a slew of other charges, Dr. Anthony Moschetto is now facing 14 counts of criminal possession of a weapon. He pleaded not guilty and is due back in court on December 9. . If convicted on the top charge, Moschetto faces up to 25 years in prison.

Moschetto is accused of hiring an intermediary to have his former partner's office torched and - when that fire resulted in only minor damage - seeking someone to attack the man, prosecutors said. Moschetto allegedly said he would pay $5,000 to have the man beaten and $20,000 to have him killed and wanted the attack to happen in early May while he was out of town, prosecutors said. He was caught on video giving an undercover officer $500 in cash and three dozen blank prescriptions as a deposit, according to authorities.

Investigators found a cache of weapons, including dozens of knives, guns and a hand grenade, in a secret room that was accessed through a motorized bookcase.

James Chmela, 44, of Selden, and James Kalamaras, 41, of Suffolk County, were also arrested in connection with the scheme and have pleaded not guilty.

The alleged murder-for-hire scheme was discovered when an undercover police investigation involving the purchase of Oxycodone pills led to the additional undercover purchases of heroin and two fully loaded assault weapons, as well as the seller's pursuit of dynamite for the purpose of blowing up a property.

During the course of the investigation, it was discovered that the assault weapons and prescriptions for the pills were originally acquired and transferred to the seller by Dr. Moschetto, who sought to pay for the arson of a fellow cardiologist's office, as well as the murder of the fellow cardiologist, partially through the illegal transfer of prescriptions and the weapons.

The case dates back to December 2014, when authorities say the first of six undercover drug buys from the seller, until March 2015, was conducted. During this period of time, the drugs sold to undercover detectives included 410 Oxycodone pills and 198 bags of heroin.

Chmela is alleged to have also taken part in the arson, with the fire believed to have been set on or around February 22. The fire damaged but did not destroy the office of another cardiologist, whose relationship with Dr. Moschetto had soured due to a professional dispute.
Related topics:
mineoladoctor arrestedmurder for hirenassau county news
Copyright © 2022 WABC-TV. All Rights Reserved.
TOP STORIES
IL shooting suspect taken into custody after 6 killed, dozens hurt
NYPD increases officers, security ahead of NYC 4th of July fireworks
Macy's 4th of July Fireworks 2022: Everything to know
Where to watch 2022 Fourth of July fireworks
Highland Park parade shooting victims range in age from 8 to 85
Joey Chestnut, Miki Sudo win Nathan's Hot Dog Eating Contest
People enjoy perfect weather at Tri-State beaches for 4th of July
Show More
AccuWeather: Clouds return on Tuesday
2 Long Island beaches reopen after lifeguard bit by shark
Teen arrested in Newark drive-by shooting that injured 9
Child found dead in Wallkill pool, adult in critical condition nearby
Box truck crashes causing parked cars to stack up in Brooklyn
More TOP STORIES News