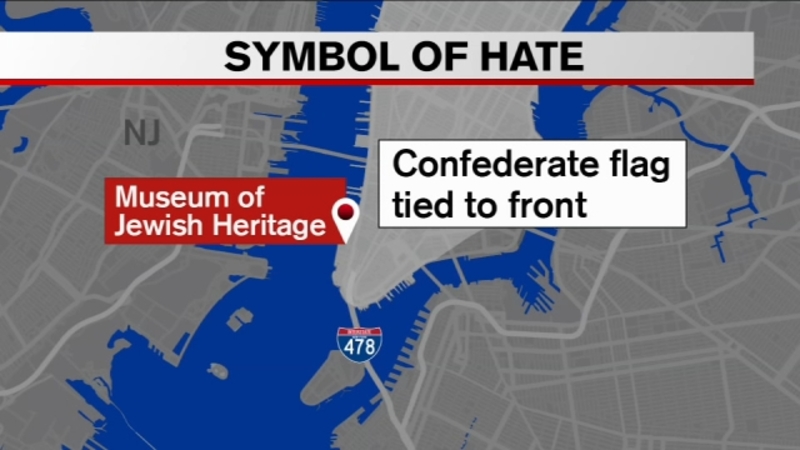 BATTERY PARK CITY, Manhattan (WABC) -- Police are searching for the person - or persons who tied a confederate flag to the door of the Museum of Jewish Heritage.

The flag was discovered overnight on the front of the museum on Battery Place in Lower Manhattan.

A California woman seen on video tackling a Black teenager whom she falsely accused of stealing her phone at a Manhattan hotel is in custody in California, the NYPD says.

The President and CEO of the museum called it an 'atrocious attack on the Jewish Community' and he is calling on a swift and forceful response by law enforcement.

"The Confederate flag is a repulsive symbol of hate, and I am disgusted by reports that someone attempted to intimidate our Jewish neighbors by tying one to the door of the Museum of Jewish Heritage in New York City. As we saw earlier this week when hate-filled mobs stormed our nation's Capitol, violent white supremacists have been emboldened by Donald Trump's divisive rhetoric -- but we will not let them succeed. In New York, we will always defend against crimes that target New Yorkers for who they are or what they believe, and I am immediately directing the New York Police Hate Crimes Task Force to offer assistance in this investigation," Cuomo said.

Mayor De Blasio tweeted, "The Confederate flag is a symbol of hate."

He went on to write, "we have zero tolerance for acts of fascism and bigotry. There will be consequences for those responsible."

The NYPD is trying to identify the man who scrawled graffiti at four synagogues in Brooklyn last Saturday morning.