Behind the scenes with the Nassau County Arson Bomb Squad 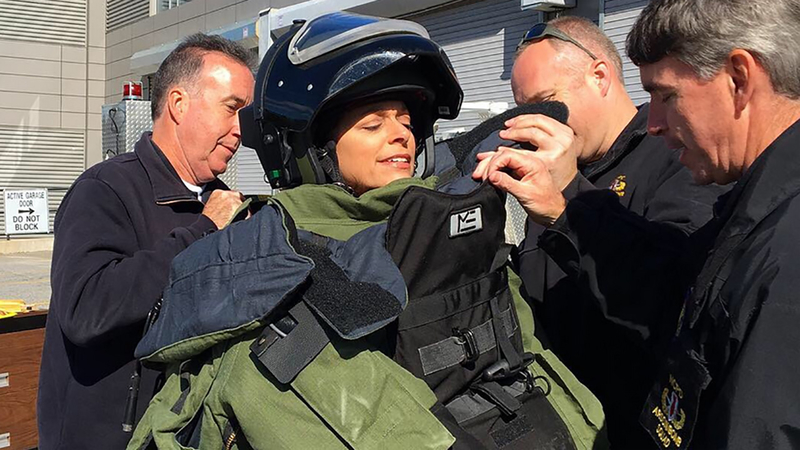 Behind the scenes with the Nassau County Arson Bomb Squad

NASSAU COUNTY, Long Island (WABC) -- The mail terror bomb scare continues to widen as law enforcement officials seize more suspicious packages, and a sprawling investigation is underway into a plot that appears to be aimed at targets of conservative anger.

Eyewitness News got a first-hand look at the difficult and elite job of analyzing suspicious packages, courtesy the Nassau County Police Department's Arson Bomb Squad at their undisclosed location, where they demonstrated some of the vital tools that have been used around the New York area over the past few days.

Detective Sergeant Michael Fitzmaurice, the bomb squad commander, also offered some tips on how to spot a suspicious package.

"Things with excessive postage on them, things that are weighted, a return address that you don't recognize," he said.

Then there's bomb disposal. The Arson Bomb Squad has what's called the TVC, or Total Containment Vessel. It's an investigatory staple.

"If something did detonate in there, we have the capability of controlling it," Fitzmaurice said. "And then we can kind of analyze residue or pieces of what's in there as evidence."

At their headquarters, they train with some real suspicious packages that they've retrieved in the past, but also ones they've constructed.

"They can be made out of either galvanized piping, black pipe, or PVC," Fitzmaurice said.

And many look remarkably similar to what has been seen this week, underlying the importance of the retrieval process.

They tell us the emphasis is always on retrieving a suspicious device with a robot first. The robots are equipped with special cameras and can also climb up and down stairs and saw through wood or metal. Some are small enough to check under cars, as well.

When all else fails, they must suit up. We tried on all the gear, which weighs a whopping 85 pounds.

Learning more about the tools, (and difficulty), of suiting up to search for suspicious packages. Safety tips, and tools used by the bomb squad, at 5:30 on @ABC7NY pic.twitter.com/h3e2FFFuou

"I think they just have to trust their training," Fitzmaurice said, addressing the physical and mental stress. "They train so often that when they go out there, they're comfortable."

There are 3,000 members of local law enforcement around the country who are trained by the FBI as bomb technicians, and at least 75 of them work in New York City, Long Island, and Westchester County. And it's a job that suddenly seems more critical than ever.