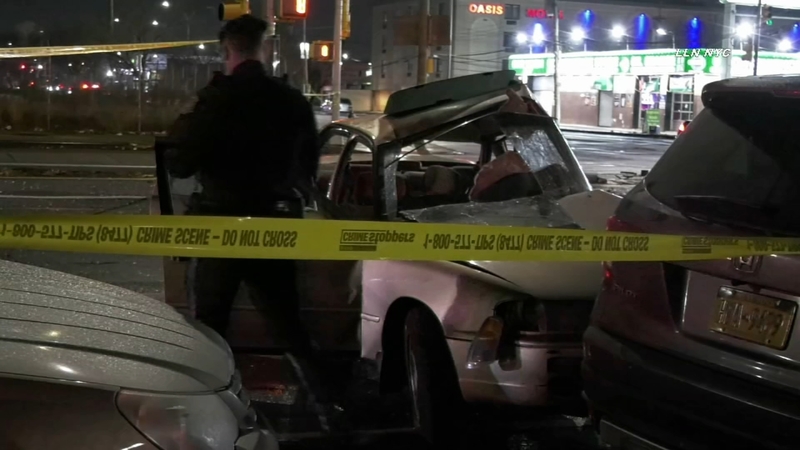 EAST NEW YORK, Brooklyn (WABC) -- The investigation continues into a deadly hit and run that claimed the lives of two women in Brooklyn over the weekend, and authorities have now identified the victims.

Detectives say a gray BMW slammed into a Toyota Camry driven by Stvil, with Liberice a passenger, before two men in the BMW fled the scene on foot.

"They left my mom and her friend dead in the car," the victim's daughter, Alexandra Liberice, said. "And they didn't look back."

She says she cannot comprehend the recklessness and heartlessness. Joanne Morales is Stvil's niece.

"She's working hard, working hard, you know, to provide for herself, her family," she said. "And for her to just lose her life, all of a sudden? Like this?"

The crash was captured on surveillance video, which shows the women entering the intersection before the BMW barrels through a red light and slams into their car broadside.

The victims were rushed to NYC Health and Hospitals/Kings County, where they were pronounced deceased.

The two first responders were met on the sixth floor by a gunman who made off with their medical bags and radios.

Their families say the two women were carpooling on their way to work, a group home where they care for mentally-disabled teenagers.

They were caring, compassionate colleagues who became good friends at work, both dedicated to their jobs and their families.

Stvil was single and lived with her sisters, while Liberice was married with two now heartbroken children.

"She would always lend a helping hand," Alexandra Liberice said. "She always wants to help, see people smile. She puts her feelings on the back burner to make sure everybody else is good, and she'll worry about herself last."

More than 36 hours later, police were still searching for the driver.

"Whoever did it, I wish they would have stayed," Morales said. "No, you didn't have to leave."