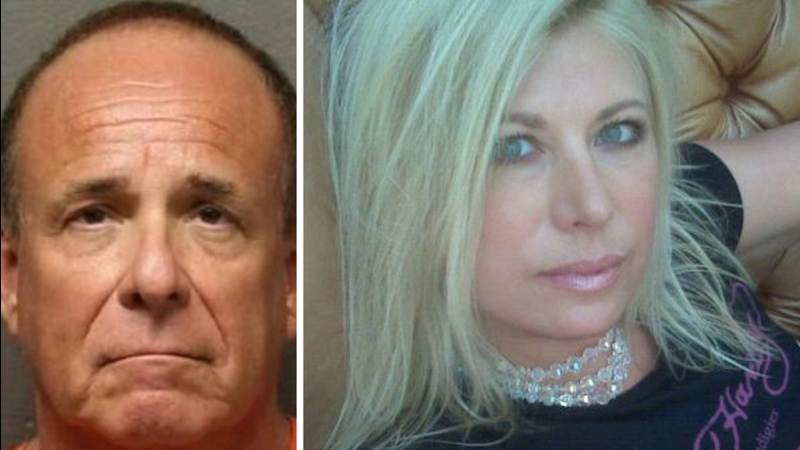 MAYS LANDING, New Jersey -- The husband of a murdered New Jersey radio host is accused of having his wife killed in order to protect an alleged drug ring he ran with the Pagans Outlaw Motorcycle Gang.

Dr. James Kauffman, 68, is charged with the murder and racketeering for his involvement in both the drug ring and the killing of April Kauffman in 2012.

Atlantic County Prosecutor Damon Tyner said during a news conference on Tuesday that it all began back in 2011 as April Kauffman threatened a divorce.

Investigators say she threatened to spend as much money as she could until a divorce was granted, and threatened to expose the drug operation.

James Kauffman and a friend, 61-year-old Ferdinand Augello -- a member of the Pagans -- began looking for a hitman at that time, investigators said.

"James Kauffman stated he would sooner kill April than grant the divorce and lose 'half his empire,'" the prosecutor's office said.

It took nearly a year, but Tyner said a hitman was eventually found. That man is identified as Francis Mulholland, a cousin of Pagan associate Joseph Mulholland and an alleged member of the drug enterprise.

Investigators say it was Francis Mulholland who entered the Kauffman's home in Linwood and shot April Kauffman twice, killing her.

The prosecutor said Mulhollands were paid at least $20,000 in cash, though that number could be higher. Francis Mulholland has since passed away.

Per Prosecutor another Pagan member who has since died carried out April Kauffman's shooting death. @6abc

Kauffman and Augello are charged with murder and racketeering.

Meanwhile - in a shocking twist - Augello was also charged with conspiracy to commit the murder of James Kauffman. Prosecutors did not go into further detail about that plot.

Along with James Kauffman, Ferdinand Augello and Joseph Mulholland, five others have also been charged with their alleged roles in the drug operation Kauffman is accused of running out of his Egg Harbor Township medical practice.
They were identified as 47-year-old Beverly Augello; 37-year-old Glenn Seeler; 61-year-old Paul Pagano; 35-year-old Tabitha Chapman; and 36-year-old Cheryl Pizza.

Investigators say Kauffman continued to run the drug operation even after his wife's murder. That all ended after his arrest in June, 2017 on weapons charges.

That incident included a standoff with police when authorities executed a search warrant at his office.

Dramatic body camera video from police showed him pulling a weapon and threatening to kill himself. Defense attorney Ed Jacobs said his client was reacting in fear that he was being arrested for the murder of his late wife April Kauffman during the June incident.

Jacobs says Kauffman told this to police at the time: "I'm not going to go to jail for something I didn't do."

Five search warrants were executed at Kauffman's offices and residences back in June in connection with a health care investigation and the warrants remain sealed.

April Kauffman's daughter, Kim Pack, had filed a wrongful death suit against Dr. Kauffman - her stepfather - and are trying to block him from accessing two life insurance policies taken out against her late mother.