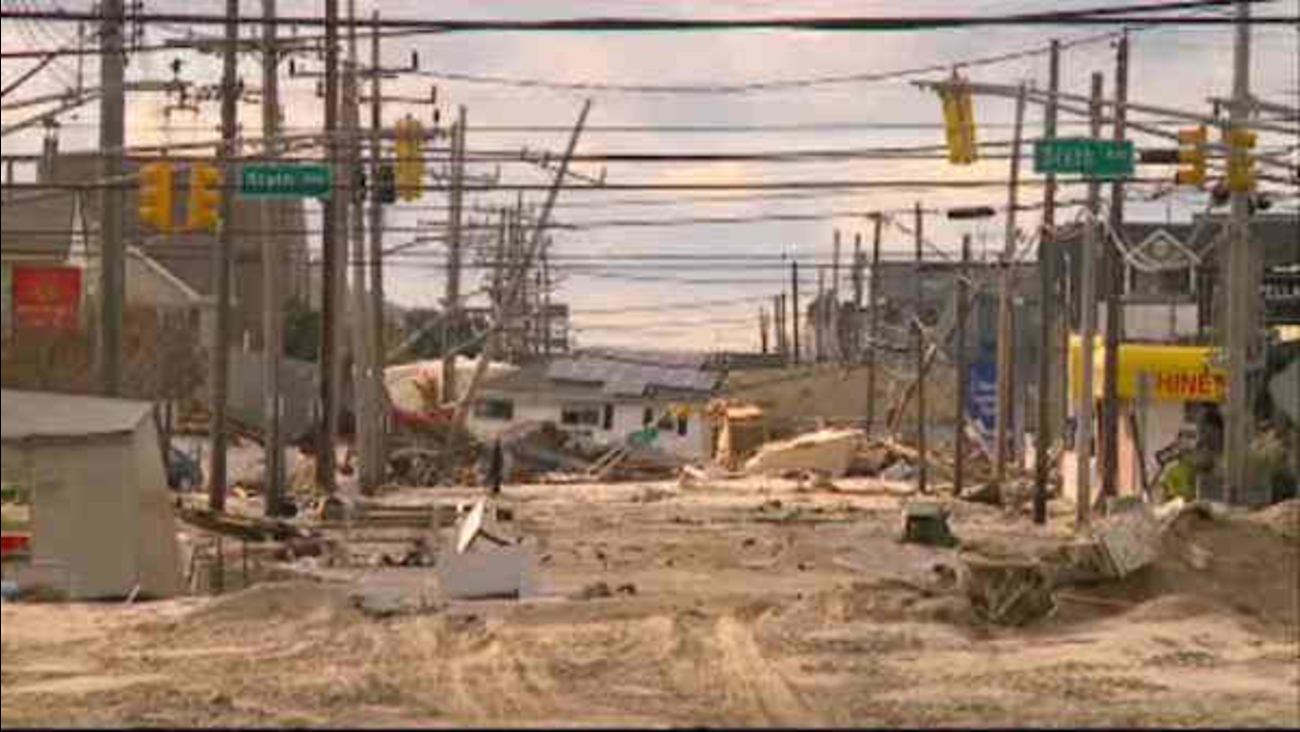 Now Gerndt has a problem that's not her fault but will likely cost her thousands of dollars to fix.

Her house is too close to Jersey Central Power & Light's high-voltage electric lines, a serious safety hazard. "They claim we need to replace the utility pole and lines and absorb the cost," Gerndt said.

Gerndt's not alone. As rebuilding continues at the Jersey Shore's coastal communities along the water, residents are finding that their raised homes, which were once safely below power lines, are now way too close.

Her neighbor, Frank Casquarelli of West Nyack, New York, has the same problem. He said he was told he'll have to pay about $6,400 for a new, taller, utility pole because the top of his raised house, now under construction, is too close to the utility's wires.

Oradell resident Michael Wurf who has a house on East Spray Way in Toms River, will have to pay about $5,000 to move JCP&L's wires. "We had to knock it down because we had to raise," Wurf said. "I didn't do it because I felt like doing it."

The state Board of Public Utilities requires that JCP&L comply with all regulations and standards, including the National Electrical Safety Code, when it designs and operates its electric system, including electricity supply lines, utility spokesman Ron Morano said.

And the utility's tariff, which details the regulations that govern the utility, requires that customers pay the cost to correct a problem if something is built too close to the wires, the company said. "There is no option and we're required to meet the code, the (National Electrical Safety Code), and to bill the customer," Morano said.

JCP&L has paid when the utility pole already was damaged and had to be replaced, Morano added.

He would not comment on individual customers, citing privacy rules. "Safety is really a big issue here. It's the overriding issue here," Morano said. "We know this is of serious concern to our customers and it is to us as well. We've been working with local building code officials, enforcement officials and customers to educate on this subject."

Gerndt's project had gone a long way - through township approvals, building permit and multiple inspections - before she or her builder, Pennington-based Mercer General Works, were told there was a problem.

"To get to this point in the project, there are so many reviews and departments and municipal officials that are blessing the proposed redevelopment that no one is stopping and bringing up points such as these," said Ron Meier of Mercer General Works.

It results in delays and work stoppages. "Here we are faced with the electric utility company holding us hostage to upgrade their equipment in order to proceed further," Meier said.

The homeowners question who should pay. Should they have to pay alone for taller poles that will benefit other houses on the street as well?

"I understand there is cost involved," Wurf said. "I don't think it is fair that I (pay) the bill because I was the first one to build a house. If I raise my wires ... then everybody else gets a freebie? I don't think that's fair."

JCP&L should change the height of the wires because the homeowners are being told they have to raise their homes, Gerndt said.

So should JCP&L pay for taller poles so homeowners can safely connect their new houses?

Stefanie Brand, director of the state Division of Rate Counsel, which represents ratepayers in cases before the BPU, said no. If JCP&L were to pay, it would eventually be charged to all its customers.

"I don't think it would be fair to charge other ratepayers for that," Brand said.

The residents' problem creates a special circumstance, but it's not something for all ratepayers to cover, Brand said. "It would be worse, I think, to charge the single mom in Atlantic City who is barely paying her bill for the pole that somebody who is rebuilding their shore house needs."

But Brand said people deserve some assistance. She said homeowners should be able to recoup the cost of the poles and other electric infrastructure from Sandy aid.

"How do we help these people who are sort of being asked to pay all this money when all they are doing is lifting up their house to comply with FEMA rules?" Brand said. "The Sandy money is where that should come from. That's what it's for."

After an inquiry by Press on Your Side, Lisa Ryan, a spokeswoman for the state Department of Community Affairs, said the department is reviewing whether the costs can be funded with federal disaster recovery money.

There should be a way to determine who pays, Toms River Councilman George Wittmann said. JCP&L should replace all the poles and charge all the homeowners on the street who are connected, he said.

"I would like to see an equitable distribution over five years and have everyone on the street pay for the poles to be replaced," Wittmann said.

The small Shore communities such as Ocean Beach 1 and Ocean Beach 3 have small streets with homes on both sides that will need to be raised. "Why not do them all at once and see if there is an economy of scale in doing that?" Wittmann asked.

Last year, Toms River resident Doug Uhlig was told he had to pay more than $20,000 for a new utility pole after he raised his Ortley Beach house. He paid. JCP&L hooked up his electric service and now he's enjoying his house.

He said the requirement that a homeowner pay the cost should be changed. "Their policy is not fair to the consumer," Uhlig said.