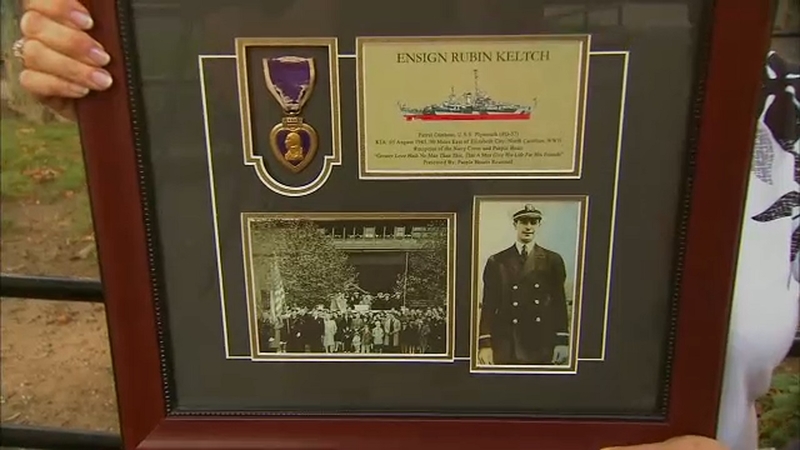 NEW YORK (WABC) -- The epitome of bravery and selflessness, Ensign Rubin Keltch made the ultimate sacrifice during WWII as German warships encroached the eastern seaboard.

"He possessed all of the qualities that an exceptional person would have - he thought of other people before himself," said his niece, Florinne Keltch Abranowitz.

A Bronx native and Cornell graduate, he was only 24 years old when his Navy gunboat was struck by a torpedo.

"Versus him saving his own life, he decided to save other lives. He rescued at least a dozen men, went into the burning ship that was sinking," said 'Purple Hearts Reunited' Founder Zachariah Fike.

Awarded the Navy Cross and Purple Heart for his valor, a Bronx park was dedicated in his name in 1944, .but over the years his Purple Heart was misplaced.

"This just happened to be one thing that I came across, that I turned it over and there was a name," said Kaufman.

Combining research and social media, Major Fike was able to track down Florinne and Ronnie - two of Keltch's nieces who never knew about one another.

"It is just amazing - it's just like a whole part of me came to life, and it really feels like a piece of my heart is back," Ronnie said.

During a special ceremony in the same park dedicated to their Uncle Rubin decades ago, both nieces met in person for the first time, making this reunion truly special in more ways than one.