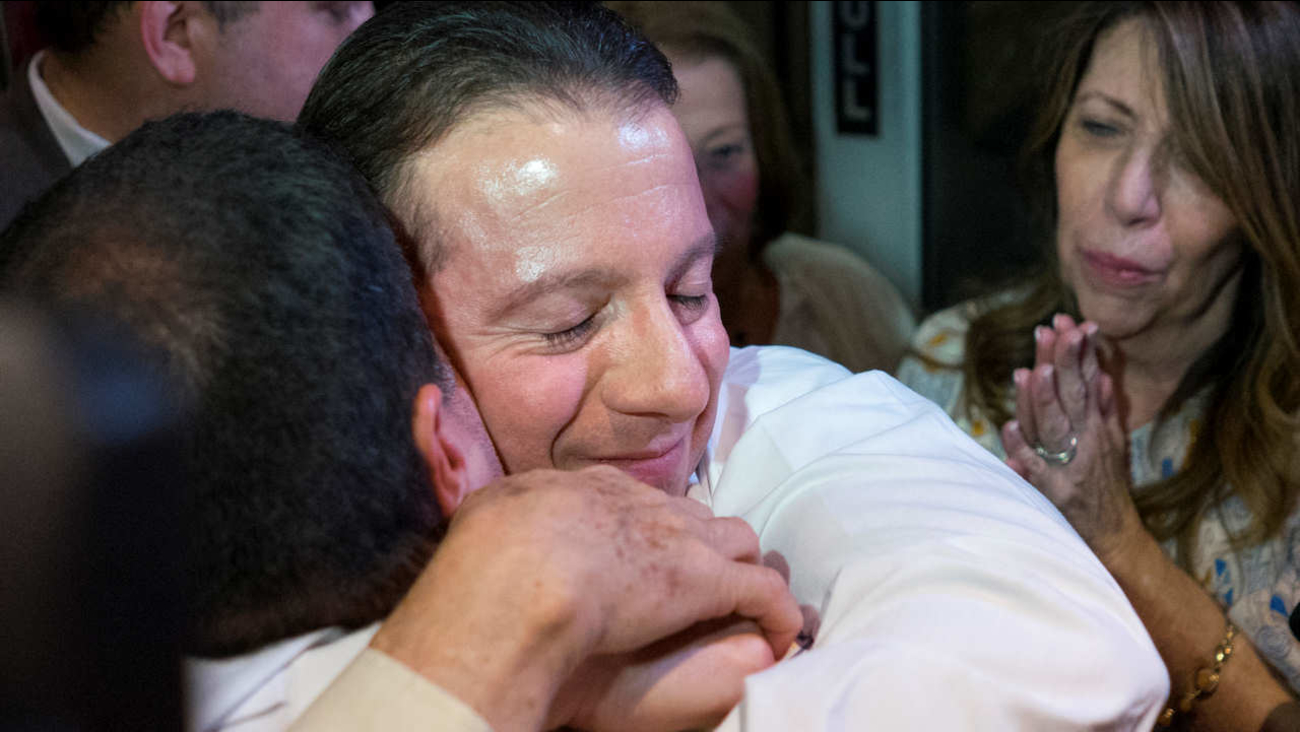 NEW YORK -- Prosecutors dropped a case Wednesday against a man who spent a quarter-century behind bars in an infamous tourist killing before getting his conviction overturned.

Johnny Hincapie's eyes moistened as prosecutors said they wouldn't retry him in a case that once symbolized a city roiled by random crime. He was freed when his conviction was overturned in 2015, but he'd faced the possibility of a retrial and potential return to prison.

Hincapie said he falsely confessed to playing a part in a 1990 subway-station mugging that ended with the deadly stabbing of Brian Watkins, a visitor from Utah. He was killed trying to protect his parents from the robbers.

After years of fruitless appeals, Hincapie persuaded a judge to toss his conviction after two witnesses and a co-defendant said he wasn't involved in the crime.

Prosecutors initially said they were committed to retrying Hincapie, but on Wednesday said they didn't believe they could win a conviction in the case.

Prosecutors still believe Hincapie's confession was true and he was involved in the mugging, but "there is significant doubt that a retrial of these charges would result in a conviction in light of the time that has passed," some of the new testimony and other factors, Manhattan Assistant District Attorney Eugene Hurley IIII wrote in a court filing released Wednesday.

Watkins and his parents were in New York from Provo, Utah, to see the U.S. Open tennis tournament. While waiting for a subway in midtown Manhattan, they were accosted by a group of youths determined to rob people for money to go out dancing, police said. One of the youths yelled, "It's killing time!" as they surged down into the station, witnesses said at the time.

Watkins' father was slashed and robbed of about $200; his mother was hit and kicked. As their 22-year-old son tried to defend her, he was stabbed in the chest, police said.

Still, he chased the attackers up two stairways before collapsing under a turnstile.

"Why did they do this to me?" he said, according to his father's testimony at Hincapie's trial. "We're just here to have a good time."

Coming a year after the 1989 rape of a woman known as the Central Park jogger, Watkins' death inked an image of New York as a city where crime was out of control. His death - one of more than 2,200 murders in 1990, compared to 335 last year - helped prompt then-Mayor David Dinkins to propose a program designed to increase police protection.

Hincapie wasn't accused of stabbing Watkins, but prosecutors argued the entire group of robbers bore responsibility for his death. Hincapie, then an 18-year-old Colombian immigrant, had confessed to going along with the holdup plan and grabbing Watkins' mother during the attack, according to court papers.

Hincapie soon disavowed his confession, telling a lawyer in a 1990 letter he had "nothing to do with this." He says he was a bystander who got mistakenly swept up in the case.