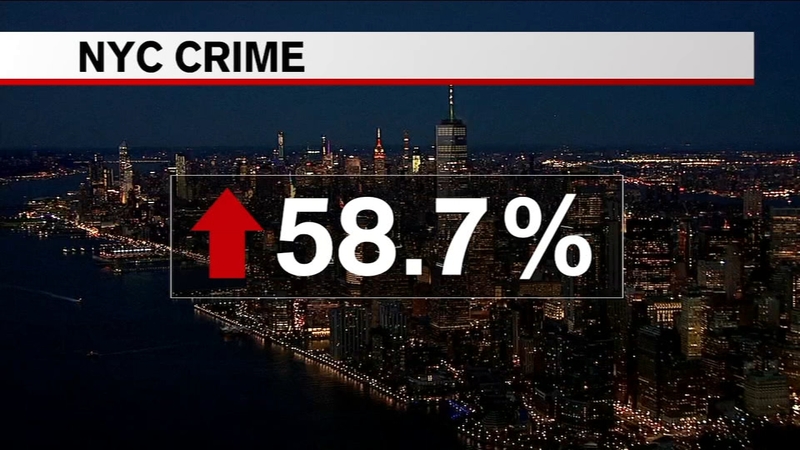 LOWER MANHATTAN, New York (WABC) -- The crime statistics for New York City are out, and they're staggering, with overall crime up nearly 60% compared to this time last year.

Nicole Robinson waited for her uptown train Thursday night, 16 feet from the edge of the platform. And she wasn't alone.

"I don't feel safe anymore. I really don't feel safe. I would rather take the bus for two hours, versus taking the train for 45 minutes," subway rider Nicole Robinson said.

Despite the NYPD's stepped-up enforcement, many New Yorkers are still deeply worried about crime, both in the subways and on the streets.

Crime is being led by felony assault, up 22%, and robbery, up 56%. Grand larceny jumped by 79% and auto theft more than doubled.

A child punched in the head in Times Square, a woman in Queens assaulted with a hammer, and Christina Lee, murdered in Chinatown. All of the incidents were random, senseless and unprovoked attacks.
EMBED More News Videos

A prayer vigil was held Saturday for the woman who was murdered in her Chinatown apartment nearly two weeks ago.

"We're in different times, now. This is not a spike. It's not a trend. We're in a crime surge right now," Boyce said.

"They're downgrading crimes to misdemeanor status and then letting them out," he said. "You can't hold anybody under the bail reform laws for misdemeanors."

But Boyce and other experts stress there are other factors. The city's inability to manage the crisis of homelessness and mental illness has made the streets and the trains less safe.

"Nothing happens overnight in New York. But I think with the proper resources, yeah, I think it's a possibility," said subway rider Peter Brill when asked if crime could turn around.

The number of shootings skyrocketed in January, but last month it leveled-off.

That needs to happen in the transit system before most New Yorkers begin to feel safer.