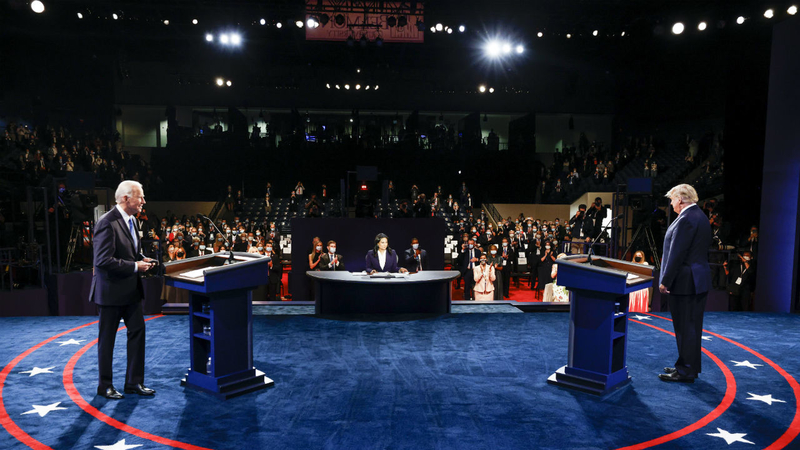 NEW YORK (WABC) -- New York City was a topic of discussion as President Donald Trump and his Democratic challenger, Joe Biden, sparred over the coronavirus pandemic.

In a contrast to the first debate, the two presidential contenders went more than 15 minutes before interrupting each other at Thursday night's debate. Helped by a rule that switched off the microphone for the candidate who was not talking, the two traded sharp barbs and critiques, but at least kept their voices lowered.

Trump insisted he had done a good job with a worldwide pandemic and said the country needs to "learn to live with it."

Biden shot back: "People are learning to die with it."

As the candidates debated further shutdowns, Biden said that businesses need to be able to open safely with social distancing protocols. He mentioned restaurants with plexiglass which prompted Trump to say that New York is a "ghost town" as more restaurants are dying.

"By the way, I will say this...if you go and look at what's happened to New York, it's a ghost town, it's a ghost town," Trump said. "And when you talk about plexiglass, these are restaurants that are dying, these are businesses with no money...putting up plexiglass is unbelievable expensive and it's not the answer...what you're gonna sit there in a cubicle wrapped around in plastic? These are business that are dying. Joe you can't do that to people...take a look at New York and what's happened to my wonderful city. For so many years I loved it, it was vibrant -- it's dying, everyone is leaving New York."

Biden immediately responded to point out the progress New York has made with the pandemic.

"Take a look at what New York has done in terms of the turning the curve down, in terms of the number of people dying," Biden said. "And I don't look at the way the things that he does, blue states or red states, they're all the United States...and look at the states that are having such a spike in the coronavirus, they're the red states, they're the states in the Midwest, upper Midwest, where the spike is occurring significantly...but they're all Americans, all Americans."

Regardless, it was a markedly less bombastic opening than in the first debate, when Trump frequently interrupted and shouted over Biden. The president seemed fairly calm Thursday, talking about his own recent bout with the virus as an example of how the country can survive it.

A look back at the final presidential debate before the Nov. 3 election.