The victims, Li Wen Chen Gioa and Hui Ci Liang, suffered serious injuries when the construction fence came crashing down on them while they were walking along West 40th Street four years ago.

Last week, an out-of-court agreement was reached with the builders that awarded Gioa $2 million in damages and Liang $800,000 in damages.

Their attorney, Benedict Morelli, tells 7 On Your Side Investigates that the fence shed was incorrectly fastened into the building.

"It clearly wasn't built to spec," he said.

A gust of wind estimated at 40 miles per hour collapsed the huge fence onto Gioa and Liang.

"It's almost like the builders can do whatever they want," Morelli said. "Someone has to be the watchdog."

We reached out to the builders, who declined to comment.

Last month, a sidewalk shed collapsed in SoHo, injuring five people. Wind also played a role, but it's unclear what other factors may have been involved.

There is no other city in the world in which hundreds of miles of sidewalks are covered with construction sheds and fences, and many of the huge plywood and steel pipe structures stay up for years. The Department of Buildings' own website has mapped nearly 8,000 sidewalk sheds, and in an earlier investigation, we found sheds that have been up for about a decade that were weathered and falling apart with loose nuts, broken braces and exposed bolts. 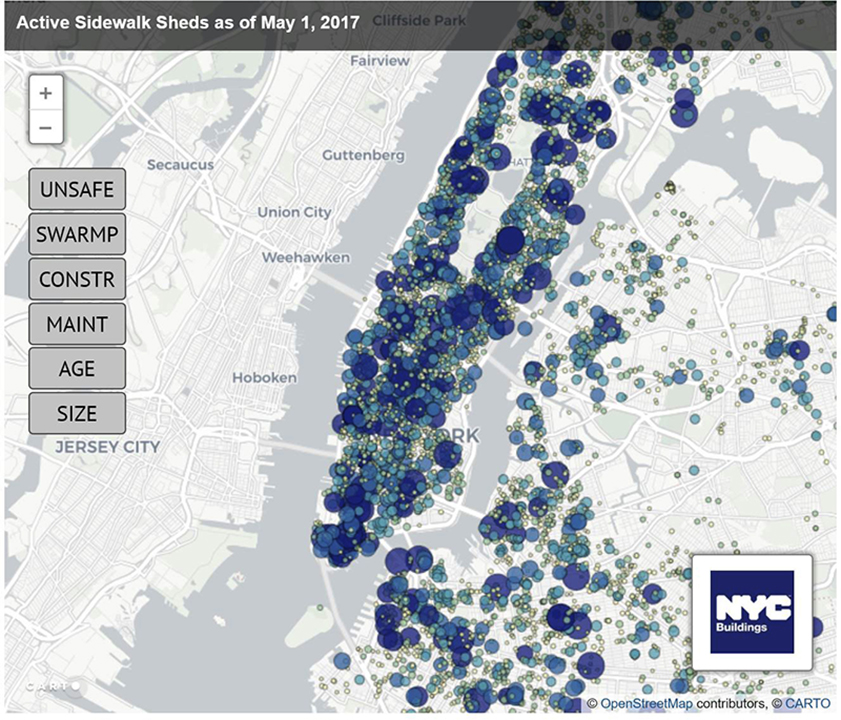 City Councilman Ben Kallos is writing a law to force building owners to make repairs on their building facades more quickly, so the sheds that protect from falling debris can come down more quickly. His legislation calls for a six-month cap on sidewalk sheds.

"There's one group that has slowed the legislation," he said. "And it's the real estate industry which keeps pushing back against the bill non-stop."

Rent Stabilization Association Director of Government Affairs Frank Ricci says many building owners lack the cash flow to make expensive facade repairs, and that putting a freeze on property tax assessment would help provide building owners with the funds to make those repairs.

"At the end of the day, it's all about money and safety," he said.

The Real Estate Board of New York also opposes the six-month cap on sidewalk sheds, saying they understand the sheds are eyesores, but they are necessary to protect the public.