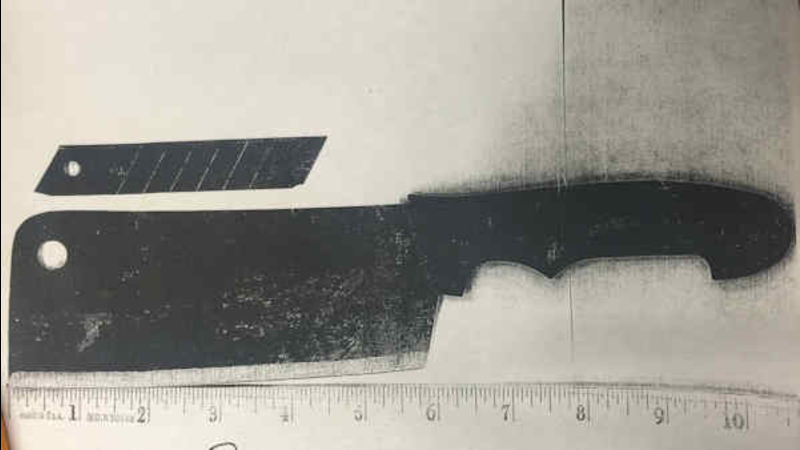 NEW YORK (WABC) -- An uptick in reported incidents of students bringing weapons to New York City schools has parents and children on edge, and now, many are looking for answers on how to deal with the issue.

Three guns were found in three different schools in the past three weeks, but it's not just guns. Other weapons, including a meat cleaver, have been confiscated from students as well.

Students at the High School For Fashion Industries on West 24th Street were stunned to see a photo obtained exclusively by Eyewitness News showing the cleaver and a razor that were confiscated last month by school safety officers.

"Oh, wow, I had no idea that students would go to that extent of violence," sophomore Michelle Echavarria said.

According to a written report given to us by the school safety officers' union, it took three safety agents to restrain a female student who was "kicking and punching." And only after she was handcuffed was the meat cleaver pulled out of her backpack.

Union president Gregory Floyd says his members are frustrated by a lack of discipline and follow up.

Several troubling cases have made headlines recently, including a steak knife recovered in a school in the Bronx last week and guns recovered in recent weeks from schools in Manhattan and Queens. On Monday, a loaded .22-caliber revolver was found on a student at PS 169 on Manhattan's Upper East Side.

We approached Mayor Bill de Blasio at a scheduled event he held on his homeless policy Tuesday, but he was not interested in answering off-topic questions. Instead, his office issued the following statement:

"These occurrences should not distract us from an important fact. Crime in our public schools fell 29 percent between 2011-12 and 2014 to 15, and our schools remain safe."

But just how safe do students feel, especially at the schools affected?