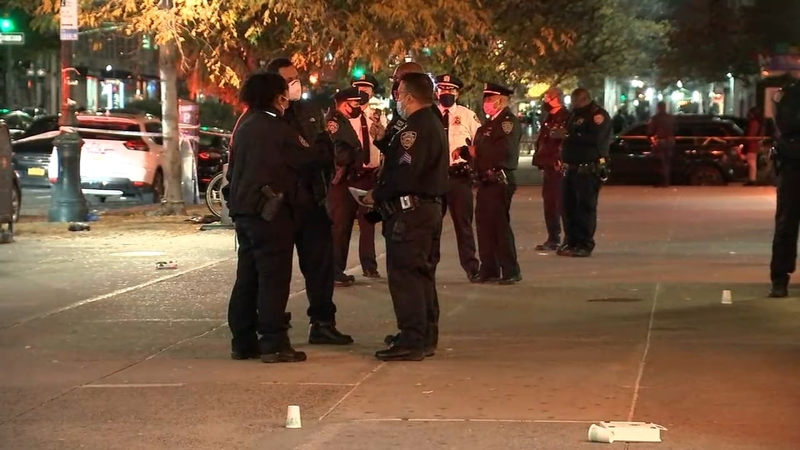 HARLEM, Manhattan (WABC) -- An 8-year-old girl and her father were among the victims in a triple shooting in Harlem on Saturday.

Shortly after 7 p.m., a number of shots were fired in front of Fine Fare Supermarket on Lenox Avenue in Harlem.

Police said two men got into an altercation and both pulled out guns and starting shooting.

In an interview, a man who we'll call John said he was trick-or-treating with his two daughters, ages eight and six years old, who were dressed up as Elsa from the Disney animated movie 'Frozen,' and an astronaut when the violence unfolded.

"I see the guy step back, show his piece and in a split second, he started blasting. It was rapid bing, bing, bing. I pushed my youngest child to the side and before I had enough time to grab my big daughter, to push her, I saw her buckle and say my leg," John said.

A stray bullet hit the eight-year-old, she's now in the hospital with a shattered bone in her leg.

John's 6-year-old was not hit but is traumatized by what she saw.

In all of the chaos, John picked his daughters up and started running.

Ee knew he had to get his eight-year-old to the hospital and so he ran into the middle of the street and flagged down a taxi.

"I didn't realize I was hit until I got into the cab, started feeling like I had a million bee stings in my arm, just excruciating," John said.

A third woman was also hit with a stray bullet.

Police believe all of thegunshot wounds came from the same gun.

As for John's little girl, it's not clear if she'll require surgery.

"It was complete no regard for human life. You seen people there, seen the children, just a fraction of an inch left or right and there would be no more me, no more my baby, the violence has to stop," John said.

Police say the gunman was wearing all black and ran off after the shooting.

"He had a massive, massive heart. He loved people a lot," his father told Eyewitness News.