Dogs face off at the 2018 Westminster Dog Show 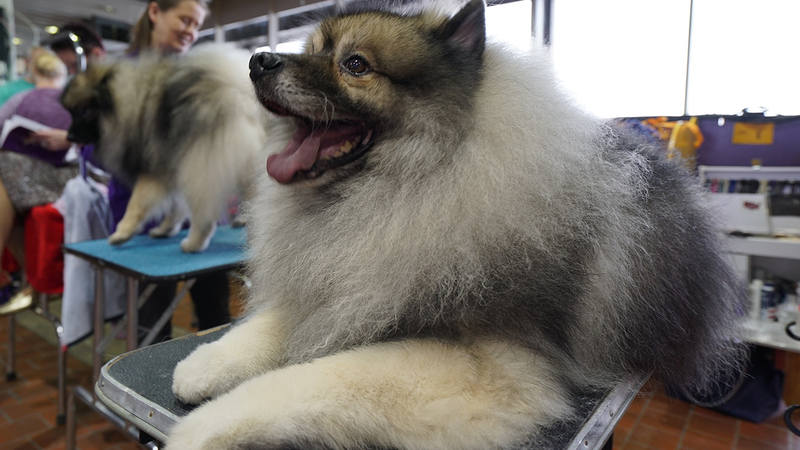 Dogs face off at the 2018 Westminster Dog Show

There are plenty of favorites including top ranked Ty the giant schnauzer, Newton the Brussels griffon and Striker the cocker spaniel.

Another contender and fan favorite was Fanucci, a young German shepherd from Farmingville, New York left so shattered, so bloodied after jumping out of a broken-down van hooked to a speeding tow truck on a New Jersey highway in 2014, his life was in jeopardy.

"You see the dog, you see the pain. You don't want him to suffer," co-owner Stephanie Schrock said. "For half an hour, we thought about whether we needed to euthanize him, trying to come up with the right decision."

Fanucci's comeback fell short as his team pulled the dog out of the event on Monday morning because a hematoma on his left ear made it flop.

There's also a special contest for junior handlers open to youngsters ages 9 to 18. They're judged on their presentation, not their dogs' particulars.

But there's no age minimum for handlers in the breed rings, a point driven home to Thanksgiving Day TV watchers who saw (emphasis on the "awwww") 6-year-old Mackenzie Huston and her long-coat Chihuahua in a semifinal round at the Kennel Club of Philadelphia's National Dog Show.

Mackenzie sometimes feels scared as she waits to show. But "when I get in the ring, I don't feel nervous," says the now 7-year-old girl from Bellmawr, New Jersey.

She isn't going to Westminster - yet - but super-young handlers have shown there, including then-7-year-old Raina McCloskey last year (with a borzoi, a big Russian hound, no less.)

Westminster's 95 junior invitees are "very competitive, they're very talented and very, very good," show chairman David Helming said. Westminster is boosting its top juniors' prize, a scholarship, from $6,000 to $10,000 this year. The eight finalists all get some education money.

Golden retrievers are the biggest entry with 32 competing, but the sweet, faithful and absolutely perfect pets have never won at Westminster? Labs, Chihuahuas, dachshunds and Dalmatians also get shut out.

Rhere is zero prize money for the best in show owner, who does get a shiny bowl, lucrative breeding prospects and bragging rights.

For the first time since 2006, no new breeds will show on the green carpet. Next year, the Nederlandse kooikerhondje and the grand basset griffon Vendeen make their debuts; last year, the American hairless terrier, sloughi and pumi were the newcomers.
The American Kennel Club decides which dogs are eligible.