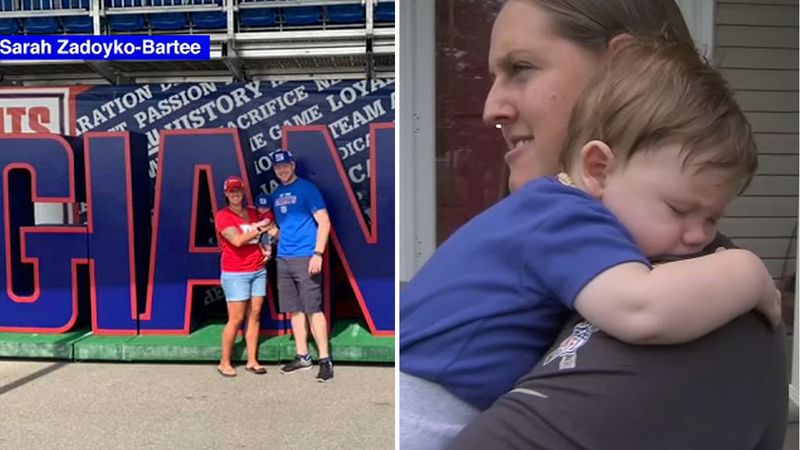 PLUMSTED TOWNSHIP, New Jersey (WABC) -- The New York Giants have changed their policy of requiring tickets for infants after a family from New Jersey shared their negative experience at a pre-season game.

All the members of Sarah Zadoyko-Bartee's family are huge New York Giants fans. Everybody has jerseys, they go to meet and greets with the players and the Bartees are happy club-level season ticket holders.

Then along came little Silas. The newest member of the Bartee family is just now 16 weeks old.

They are a family that plays together, so naturally, the baby was rolled right into the trip two weeks ago, an hour and a half away, to MetLife Stadium for the preseason game Aug. 16 against the Bears.

"We got through the first gate, they re-scan your tickets to get into the club, and at that point we had been asked if we had a ticket for our, at the time 14-week-old, son," Bartee said. "We both kind of looked at each other confused by the question as to why he would need a ticket."

Silas, who spends most of his time sleeping, apparently needed an $800 ticket too.

At MetLife Stadium, the policy is all children up to 34 inches tall can get into events for free, including Jets games, but they have to sit on someone's lap.

But the New York Giants policy said everyone entering has to have a ticket -- including sleeping children.

They did allow Silas in because it was pre-season game.
"They did give us a one-time courtesy and they escorted us to our seats, but they didn't allow the baby into the club," Bartee said.

She posted her displeasure about her favorite team on social media with a hope.

"They are one of five teams left in the whole NFL that don't have a family friendly policy," Bartee said.

The Giants released a statement Tuesday, saying they were in the process of revising their long-standing policy.

"We were not made aware of this particular situation until after the fact. We have attempted to reach out to the mother to discuss what occurred that evening, but have not yet made contact. In addition, we are in the process of revising our long-standing policy to bring it more in line with the policy of MetLife Stadium. Also, please note there is a nursing suite behind section 142 on the Plaza level. This suite can accommodate two people simultaneously and has comfortable chairs, a pull curtain for privacy and televisions. There is also a location where the Stadium will store milk for mothers that choose to pump."

By Wednesday, they called the family to apologize and said they are happy to make the change to become a more family friendly team.