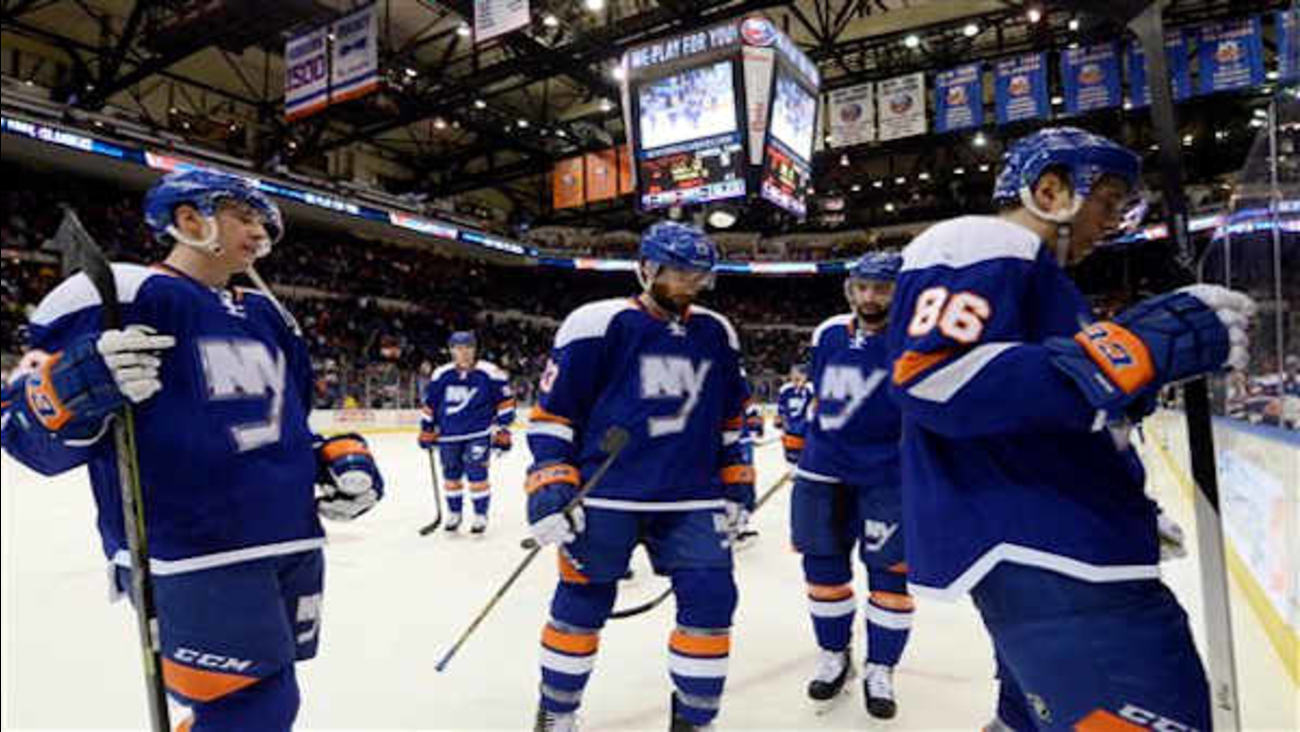 UNIONDALE -- With both teams completing the second half of back-to-back sets, the visiting Carolina Hurricanes got the best of the New York Islanders.

Jay McClement scored twice and Cam Ward made 21 saves as the Hurricanes beat the Islanders 5-3 on Saturday for their third straight win.

Carolina topped Washington 3-0 at home on Friday night while the Islanders edged Calgary 2-1 on Long Island. The Hurricanes had the better of play throughout, peppering Islanders backup Chad Johnson with 41 shots and scoring twice on the power play.

"We threw a lot of rubber at their net, and by doing that created a lot of opportunities," Ward said. "I thought our game was solid throughout. We played big and heavy, didn't give them a lot of time and space."

McClement tied it 1-1 late in the first period and then scored again midway through the second for his sixth goal. Justin Faulk, Brad Malone and Michal Jordan also netted second-period goals for Carolina, which beat the Islanders for the first time in four meetings this season.

Michael Grabner opened the scoring for the Islanders at 11:47 of the first with his seventh goal, rifling the puck past Ward from the left circle. Nikolay Kulemin and John Tavares also scored for the Islanders.

McClement's first goal with 2:19 left in the first was scored when the puck deflected off his skate and past goalie Chad Johnson. The goal was upheld on video review ruling McClement hadn't used a distinct kicking motion.

Faulk put Carolina ahead 2-1 at 1:26 of the second with his 12th goal on the power play. Eric Staal and Victor Rask had assists.

Malone made it 4-2 with 2:14 left in the second when he tapped a loose puck past Johnson for his sixth goal. Jordan added his second of the season on the power play with 8 seconds remaining in the second to give Carolina a three-goal edge.

"We were controlling play for the most part, didn't give them a whole lot," McClement said. "We had to skate against them, get in their way, slow them down. We did a better job of that."

Tavares got New York within 5-3 at 9:35 of the third with his team-leading 30th goal. It is the second time the Islanders captain has hit the milestone. Tavares had a career-best 31 goals in the 2011-12 season.

"Clearly we weren't as good as we needed to be," Tavares said. "They were the more desperate team."

It was only the second loss in 13 home games against Metropolitan Division rivals for the Islanders (41-21-2).

This concluded a busy stretch for New York, which played eight games in 13 days, including three back-to-back sets. The Islanders were 4-3-1 in those games, starting with a 6-5 home loss to the Rangers on Feb. 16.

"We can't use the schedule as an excuse," Islanders forward Matt Martin said. "Every team has a busy schedule."

The Hurricanes (24-30-7) opened with 10 shots before the Islanders had their first, and outshot New York 18-9 in the opening period. They continued the barrage in the second with an 18-10 advantage. They have now won four of five.

The Hurricanes traded defenseman Tim Gleason to the Washington Capitals earlier Saturday for Jack Hillen, who arrived an hour before the game and started on defense alongside Jordan.

On Wednesday, the Hurricanes - who are well behind in the Eastern Conference playoff race - also traded forward Jiri Tlusty to Winnipeg, and defenseman Andrej Sekera to Los Angeles.

The Islanders, 23-9 at home this season, won six of 10 games there in February. Their next four games are at Dallas, Nashville, Florida and Toronto before they returning home to face the Rangers on March 10.