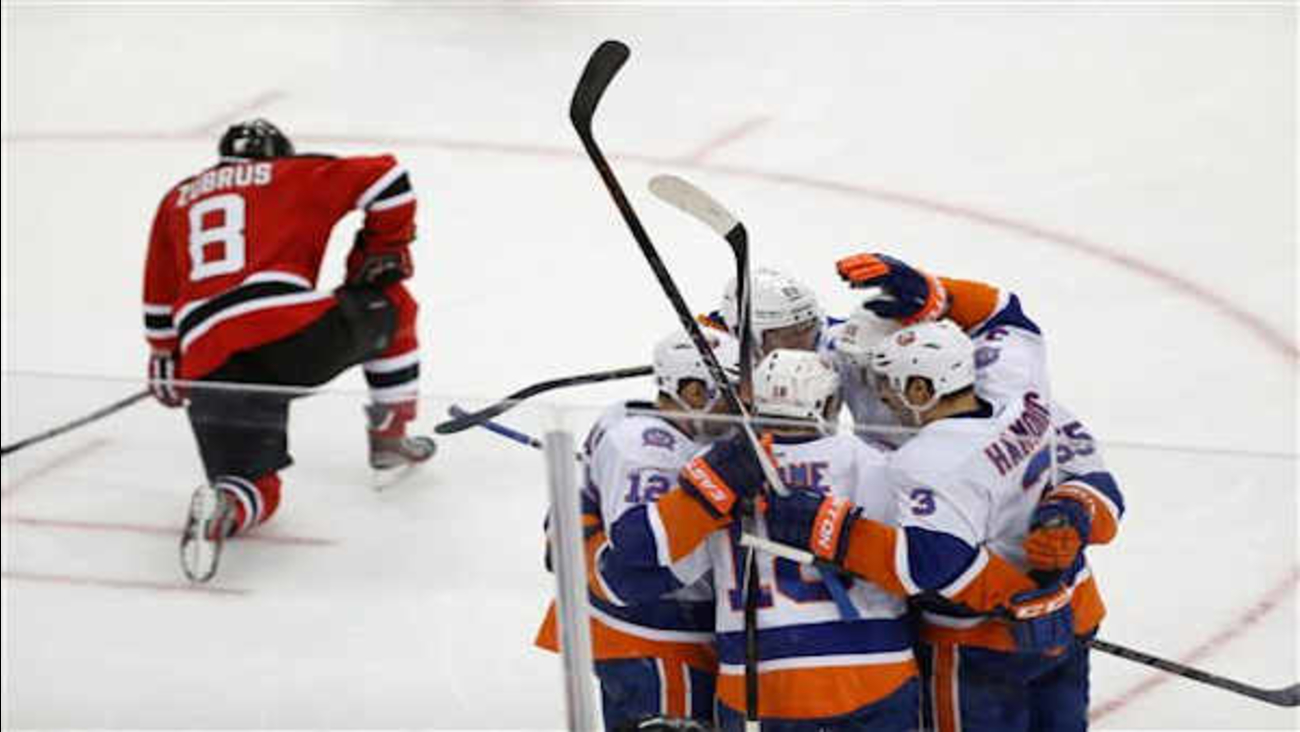 NEWARK -- Jaroslav Halak made 26 saves in his return to the lineup, and the New York Islanders snapped a season-high, four-game losing streak with a 3-0 victory over the New Jersey Devils on Saturday night.

Recently benched Ryan Strome scored a goal and set up another by Travis Hamonic as the Islanders posted a much-needed win in their bid to catch the Rangers in the Metropolitan Division. Kyle Okposo added an empty-net goal with 38 seconds left.

Halak, who missed the Islanders' previous game with a lower-body injury, was outstanding in recording his fifth shutout of the season.

Strome, a healthy scratch two games earlier, scored in the first period for his first goal in nine games. Hamonic added his in the third after a power play ended.

Cory Schneider made 27 saves for the Devils, whose three-game winning streak was snapped.

The game between the area rivals had all the atmosphere of a playoff game with a mixed crowd at the Prudential Center. Each side tried to drown out the other with cheers of "Let's Go Devils" or "Let's Go Islanders.

The Devils kept pace with the Islanders despite playing in Buffalo on Friday night. The Islanders had the previous three days off.

The difference was Halak, who also got some good fortune when Travis Zajac's second-period shot hit the goal post.

Halak protected the lead in the third period, stopping a blast by Steve Bernier and a rebound attempt by Scott Gomez eight minutes into the period.

Halak also stoned Gomez late in the second period when the veteran center redirected a pass from Bernier into the goalie's pad while standing about 2 feet away. He also had good stops on Adam Henrique and Eric Gelinas in the period.

Strome's winner came 7:37 in. set up by a hustle play by Nikolay Kulemin after Schneider and defenseman Gelinas seemingly were caught off guard.

Schneider sent the puck to the corner with Kulemin closing in from center ice. Gelinas didn't realize he was under pressure, and Kulemin knocked him off the puck and found Strome in the left circle for a shot that beat Schneider.

Hamonic gave the Islanders breathing room just four seconds after a penalty to Stephen Gionta expired. Strome got the puck to Hamonic near the left circle and he scored his fifth of the season at 12:19 of the third.

The goal seemed to take the wind out of the Devils, whose playoff chance are slim with 10 games left in the regular season.

Okposo iced the game after being set up by captain John Tavares, who didn't have a point during the Islanders' losing streak.

NOTES: New Jersey top goal scorer Mike Cammalleri (illness) missed his second straight game. ... Devils forwards Reid Boucher and Stefan Matteau didn't play after being called up from Albany (AHL) on emergency conditions. ... Islanders D Nick Leddy returned to the lineup after missing four games due to an upper-body injury. ... Devils F Michael Ryder was a healthy scratch after playing in three straight games. ... Schneider has given up two goals or fewer in 17 of 21 games.