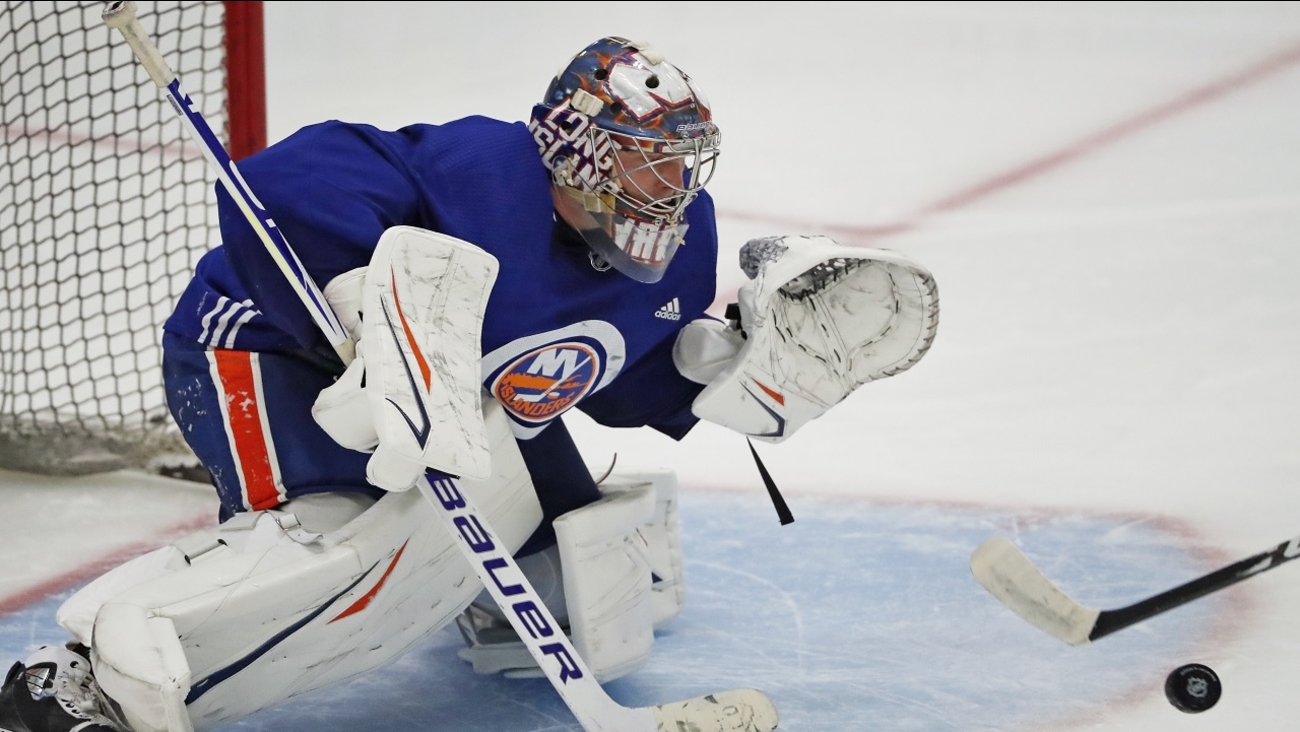 AP
EDMONTON, Alberta -- Five years after socially distancing from the Prince of Wales Trophy and losing in the Stanley Cup Final, the Tampa Bay Lightning got their hands on and arms around it to embrace their Eastern Conference championship.

Anthony Cirelli scored in overtime and Tampa Bay beat the New York Islanders 2-1 in Game 6 of the East final Thursday night and go back to the Cup Final for the first time since 2015. Injured captain Steven Stamkos, who wouldn't even stand near the trophy then out of superstition, walked on to the ice to accept it along with the Lightning's entire traveling party.

Players and coaches screamed with joy after taking a team photo with deputy commissioner Bill Daly. That came minutes after they streamed on to the ice to celebrate Cirelli's goal 13:18 into overtime.

Tampa Bay ended each of its three series victories in overtime and goes on to face the Dallas Stars for the title. Only New York lasted more than five games, pushing the Lightning to their limits before their talented core got them into the final.

They're four wins from the Cup despite being without Stamkos all postseason and missing top center Brayden Point for two games against the Islanders. They can thank defenseman Victor Hedman for scoring his ninth goal of the playoffs, Nikita Kucherov for playing 28:22 and Andrei Vasilveskiy making 26 saves while his teammates peppered Islanders goaltender Semyon Varlamov with 48 shots.

Tampa Bay is trying to win its first championship since 2004. It's the first time in franchise history the Lightning didn't play a seven-game series in the conference finals.

It wasn't easy getting to this point against an opponent willing to rope-a-dope, block shots and wait to pounce on chances. The Islanders got their break in Game 5 to prolong the series when Tampa Bay defenseman Kevin Shattenkirk fanned on a shot to pave the way for Jordan Eberle's double-overtime goal, but they were on the wrong side of it Thursday.

The Islanders scored first for the fifth consecutive game when Devon Toews beat Lightning goaltender Andrei Vasilevskiy to the far post on a wraparound goal 4:15 in. In a playoffs full of defensemen scoring, it's Toews' second goal, though replays showed seven Islanders players on the ice with what should have been a too many men penalty before he scored.

Fittingly, Tampa Bay's top defenseman tied it less than two minutes later. Victor Hedman skated to the net somehow unmarked and buried a juicy rebound - one of the few Varlamov gave up all game. Hedman's ninth goal of the postseason, which counts three round-robin games, tied him with Bobby Orr and Brad Park for the most in a single playoffs by a defenseman.

"He's the best I've ever seen him play," forward Alex Killorn said about Hedman. "He's showing up in big moments here in the playoffs."

With an assist on Hedman's goal, Nikita Kucherov moved into the playoff scoring lead with 26 points.

While the Islanders went 12 minutes without a shot on goal from late in the first period until midway through the second, the Lightning got an injury scare later in the period. Cirelli collided knee-on-knee with Anders Lee when the Islanders captain tried to exit the offensive zone and went airborne. Cirelli skated off gingerly and favored his right knee walking down the tunnel but returned for the third and was the OT hero.

Tampa Bay got Point back after he missed Games 3 and 5 with injury. Point played through obvious pain in Game 6, occasionally using a massage device on the bench between shifts.

The Lightning advanced despite failing to score on five power plays, including a double-minor on Andy Greene for high-sticking Kucherov with 23 seconds left in regulation that carried into overtime.

NOTES: Tampa Bay improved to 10-1 in one-goal games and 6-1 in overtime this postseason. ... Varlamov's 46 saves were a playoff career high. ... With Point back, Carter Verhaeghe was scratched. ... Adam Pelech was ruled unfit to play, and Noah Dobson made his NHL playoff debut in his place with the Islanders again dressing seven defensemen. Dobson, who last played in exhibition action in late July, became the first player born in the 2000s to dress for the Islanders in a playoff game.