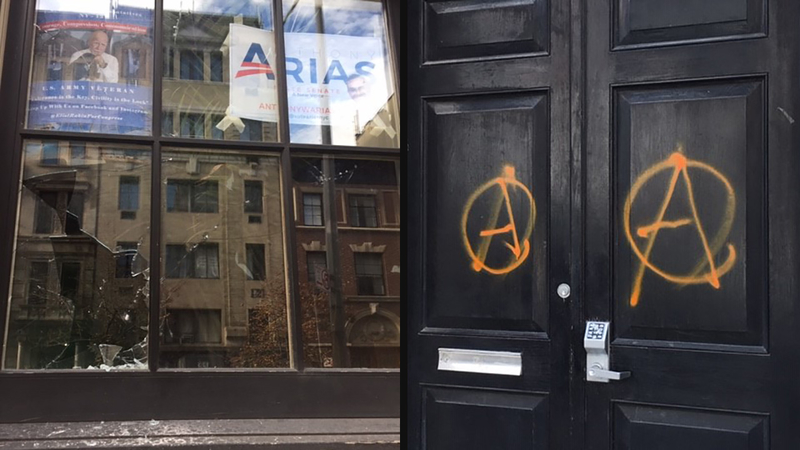 It happened around 1:30 a.m. at the location on East 83rd Street on Upper East Side, where windows were broken, doors were spray-painted and glue was put in the locks and on the handles. A threatening message was also left at the scene, telling Republicans the "attack is merely beginning."

"Tonight, we put the Republican Party on notice, in defiance to the policy of mass misery they championed," the note read. "The US government has established concentration camps around the country for Latino people, shamelessly murder black people, and continues its war machine that has slaughtered Muslim people with impunity for decades."

New York Republican Chairman Ed Cox held a press conference Friday with Manhattan GOP Chairwoman A.J. Catsimatidis and others to condemn the crimes and call on Democrats to cease inciting these attacks and urge civility.

"You will see this is an act of political violence done by cowards in the middle of the night," Cox said. "And all Democratic officials, whether elected or otherwise, (need) to condemn this act of violence."

The note, though, also referenced Democrats.

"The Republican Party, joined by their spineless partners-in-crime, The Democrats, institute a policy of domestic and foreign terror felt the world over," it read. "Our attack is merely a beginning. We are not passive, we are not civil, and we will not apologize."

Democrats responded to the news, saying they "condemn this act of vandalism," but they went on to say, "Ed Cox and Marc Molinaro's rhetoric on this is wildly inappropriate. We need less hate and division -- not more."

Democrats also pointed to President Donald Trump as the one who's been uncivil about a lot of things, but especially about Democrats.

"They've gone wacko," Trump said at a recent rally. "They are so far to the left that they consider Pocahontas (Trump's nickname for Sen. Elizabeth Warren) to be a rational person."

The vandalism happened one day before the organization hosts Gavin McInnes, founder of the far-righ men's organization Proud Boys.

"While these atrocities persist unabated, the Metropolitan Republican Club chose to invite a hipster-fascist clown to dance for them, content to revel in their treachery against humanity," the note read.

The incident was deemed as criminal mischief, since nothing was taken.