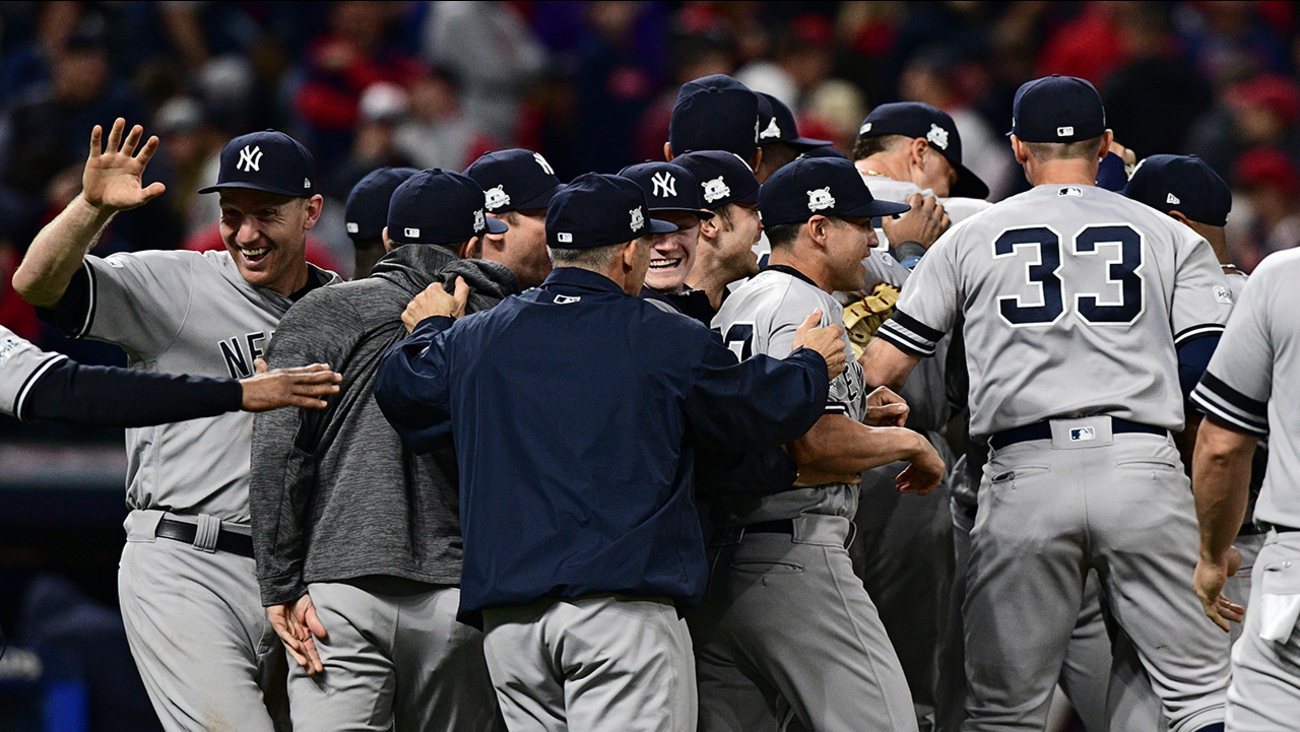 AP
CLEVELAND, Ohio -- These young Yankees were unshaken, resilient and as tough as the city they represent.

The baby Bronx Bombers have grown up fast.

Didi Gregorius, following in the October footprints left by Derek Jeter, homered twice off Corey Kluber as New York beat the Cleveland Indians 5-2 in Game 5 on Wednesday night to complete its comeback from a 2-0 deficit in the Division Series and dethrone the AL champions.

The bend-but-don't-break Yankees, way ahead of schedule, staved off elimination for the fourth time in this postseason and advanced to play the Houston Astros in the AL Championship Series starting Friday night at Minute Maid Park.

With a blend of young stars and older veterans coming up big, the Yankees rocked Cleveland and bailed out manager Joe Girardi, who failed to challenge a key call in a Game 2 loss that threatened to sabotage New York's season.

"These guys had my back and they fought and fought," Girardi said. "They beat a really good team. What those guys did for me, I'll never forget it. "

The Yankees went 2-5 against the AL West champion Astros, led by 5-foot-6 dynamo and MVP candidate Jose Altuve. But none of that matters now to this group of New Yorkers.

After winning twice at home, and after Girardi said he "screwed up" and felt horrible about it, the Yankees - with little offensive help from rookie star Aaron Judge - came into Progressive Field and finished off the Indians, who won 102 games during the regular season, ripped off a historic 22-game winning streak and were favored to get back to the World Series after losing in seven games a year ago to the Chicago Cubs.

"Nobody wanted the season to be over," Indians manager Terry Francona said. "It doesn't wind down, it comes to a crashing halt. It's disappointing. We felt good about ourselves. We made it harder to win, especially in the last two games."

The Indians closed to 3-2 in the fifth against starter CC Sabathia before David Robertson pitched 2 2/3 hitless innings for the win. Yankees closer Aroldis Chapman, who faced Cleveland in last year's spine-tingling World Series and signed an $86 million free agent contract in December, worked two innings for the save.

Chapman went to the mound with a three-run lead in the ninth after Brett Gardner battled Cody Allen for 12 pitches before hitting an RBI single, with New York's fifth run scoring when Todd Frazier raced home on right fielder Jay Bruce's throwing error.

Gardner's gritty at-bat was symbolic of these Yankees. They wouldn't give in.

"We can win a lot of different ways," Gardner said.

When Austin Jackson was called out on strikes to end it, the Yankees rushed to the mound to celebrate with a wide-eyed Chapman. An elated Girardi hugged his coaches.

On Friday, Girardi was crestfallen, afraid he had wrecked the season.

"After Game 2, Joe came up to me in this same spot (outside the manager's office) and said, 'Hey, man. I'm sorry,'" Yankees general manager Brian Cashman said. "I told him, 'We just have to keep battling. Nothing is over yet.' No one on the plane home thought it was over at all."

The Yankees became the 10th team to overcome a 2-0 deficit to win a best-of-five playoff series. New York also did it in 2001, rallying to beat Oakland - a series remembered for Jeter's backhand flip to home plate.

Gregorius, who took over at shortstop following Jeter's retirement after the 2014 season, hit a solo homer in the first off Kluber and added a two-run shot in the third off Cleveland's ace, who didn't look like himself during either start in this series.

One win shy of a Series title last year, the Indians had only one goal in mind in 2017.

They came up short again, and have now lost six consecutive games with a chance to clinch a postseason series. The skid dates to last year's World Series, when they squandered a 3-1 lead to the Cubs.

Cleveland is the first team in history to blow a two-game series lead in consecutive postseasons.

Everything was set up for the Indians: Kluber on the mound, Game 5 at home, sensational setup man Andrew Miller rested.

The Yankees, though, wouldn't be denied. They battled back from a 3-0 deficit in the first inning of their wild-card game against Minnesota and then had to overcome a crushing loss in Game 2, when Girardi's decisions led to him being booed at Yankee Stadium.

But these Yankees displayed pinstriped pride and pulled Girardi off the hook.

"I had a hole in my heart for about five or six days," he said.

The Yankees advanced without much help from Judge, who struck out four times in Game 5 and went 1 for 20 (.050) in the series with 16 strikeouts - an ALDS record. But the 6-foot-7 rookie might have saved New York's season in Game 3, when he reached above the right-field wall to rob Francisco Lindor of a two-run homer in a 1-0 win. "I didn't do my job at the top of the order, but my teammates came up big for me," Judge said.

Kluber was one of baseball's most consistent pitchers all season, winning 18 games and leading the AL with a 2.25 ERA.

However, October was cruel to the right-hander. He allowed nine runs, including four homers, over 6 1/3 innings in two postseason starts, hardly what he or the Indians expected.

Kluber overcame a back issue earlier this season and it flared up this fall.

"He's fighting a lot," Francona said. "I think you also have to respect the fact that guy wants to go out there and he's our horse. And sometimes it doesn't work."

Gregorius set a franchise record for home runs in a season by a shortstop with 25, one more than Jeter hit in 1999 when No. 2 led the Yankees to a second straight World Series title.