KABC
MONROVIA, Calif. -- There was another up-close-and-personal encounter with the local wildlife in Monrovia Thursday afternoon.

A bear wandered down from the foothills and up into a neighborhood, even stopping to take a drink from a pool.

The California Black Bear took a daytrip from the forest down to Hillcrest Boulevard near Mayflower Avenue. The hot weather may have been the driving force, knowing there are swimming pools nearby.

Instead of going for a swim, the bear took a drink. It was in no hurry to head home and found a cozy tree to curl up in for a snooze.

For people who live in the foothills, having the occasional visitor comes with the territory.

This bear sighting isn't far from the home of Jewel the French bulldog, who showed two bears who's the boss last Friday.

Surveillance cameras captured the 20-pounder as she sent both bears scampering upstairs, then down, around the patio and eventually over the fence.

"This guy will probably be back later on tonight because tonight is trash night," said Espinosa.

Where there is food or cool water, bears will seek it out. The one place they won't likely return to is the house with the ferocious Frenchy - now known on YouTube and perhaps amongst the local bears.
Related topics:
monrovialos angeles countybear in treeanimalanimal newsbearneighborhood
Copyright © 2020 KABC-TV. All Rights Reserved.
RELATED 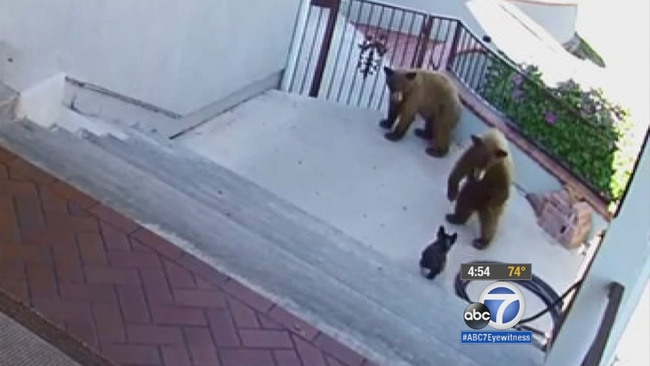 Vets accidentally give cat euthanasia instead of vaccine