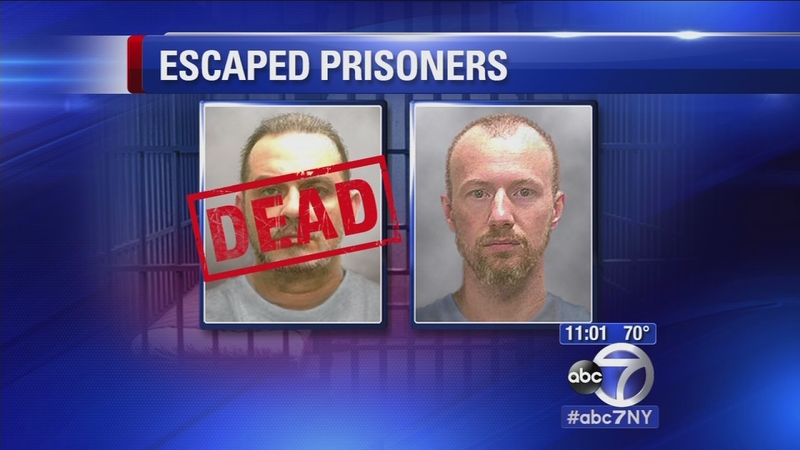 MALONE, N.Y. (WABC) -- Richard Matt, one of the two convicted murderers who escaped from prison, was shot and killed by a border patrol agent near the Canadian border.

The shots were fired in a remote area of Franklin County, where law enforcement was searching for the pair.

A man says one of his best friends saw a misplaced liquor bottle at his upstate New York cabin and alerted police who had been searching for two escaped prisoners. Shortly after those officers shot and killed one of the escapees nearby.

Mitch Johnson says his friend Bob Willett checked earlier Friday on his hunting cabin in Malone. He says Willett told him he noticed on a table a liquor bottle that wasn't there the day before.

Police sent a team to the camp area. Willett and police later heard a gunshot in the woods off State Route 30 in Malone.

U.S. Sen. Charles Schumer says at least one of the two escapees was armed.

Law enforcement was contacted very early Friday morning by a woman who reported that she got a knock at her door. She didn't answer the door, but instead called 911. Police arrived around 2 a.m., and search dogs picked up a scent of the men.

New York Governor Andrew Cuomo said during a press conference late Friday that they have "several leads on Mr. Sweat and his possible whereabouts." He added while you never like to see anyone lose their life, while referring to Mr. Matt, that the two escaped prisoners were in a state prison for murdering people in horrific crimes and they are very dangerous.

State Police Sgt. Joseph D'Amico thanked the public for being vigilant and providing information that led to apprehension of Matt. "We can tell you that they verbally told him to put up his hands, and when he did not comply he was shot," D'Amico said. "Often times you find weapons left behind, so from day one we've assumed that they are armed." There was no gunfire from Matt, but a firearm was recovered.

Authorities have been hot on the trail since DNA evidence confirmed the two broke into a hunting camp in Mountain View on June 20. The DNA was the key piece of evidence that gotten them to this point, allowing them to hone their search to a specific track.

The development comes 20 days after the two elaborately escaped from the Clinton Correctional Facility in Dannemora.

More than 1,100 officers have been involved in the search.

Matt and Sweat used power tools to saw through a steel cell wall and several steel steam pipes, bashed a hole through a 2-foot-thick brick wall, squirmed through pipes and escaped early June 6.

Sweat was serving a sentence of life without parole in the killing of a sheriff's deputy in Broome County in 2002. Matt was serving 25 years to life for the killing and dismembering of his former boss.

A civilian worker at the prison has been charged with helping the killers flee by giving them hacksaw blades, chisels and other tools.

Prosecutors said Joyce Mitchell, a prison tailoring shop instructor who got close to the men while working with them, had agreed to be their getaway driver but backed out because she felt guilty for participating. Mitchell pleaded not guilty June 15 to charges including felony promoting prison contraband.

Authorities said the men had filled their beds in their adjacent cells with clothes to make it appear they were sleeping when guards made overnight rounds. On a cut steam pipe, the prisoners left a taunting note containing a crude caricature of an Asian face and the words "Have a nice day."

Authorities also said Mitchell had discussed killing her husband, Lyle Mitchell, as part of the plot.

Lyle Mitchell's lawyer, Peter Dumas, said June 18 that his client was shocked by word of the plot and that Joyce Mitchell had told her husband she couldn't go through with it and the inmates threatened to harm him.

"Toward the end, Joyce had told Lyle - and we have no reason to doubt it - that she told Sweat and Matt that she wasn't going to go through with it," he said. "At that point, they threatened her by threatening Lyle, saying they were going to have someone on the outside do something to him or someone on the inside when he was back at work do something to him, so I think it was a point of control."

Lyle Mitchell was cooperating with authorities and wasn't facing charges.

On June 24, authorities charged Clinton correction officer Gene Palmer with promoting prison contraband, tampering with physical evidence and official misconduct. Officials said he gave the two prisoners the frozen hamburger meat Joyce Mitchell had used to hide the tools she smuggled to Sweat and Matt. Palmer's attorney said he had no knowledge that the meat contained hacksaw blades, a bit and a screwdriver.

Dannemora, built in 1845, occupies just over 1 square mile within the northern reaches of the Adirondack Forest Preserve and is surrounded by forest and farmland. The stark white perimeter wall of the prison, topped with guard towers, borders a main street in the village's business district.

The escape was the first in history from Clinton Correctional's maximum-security portion. In July 2003, two convicted murderers used tools from a carpentry shop at Elmira Correctional Facility to dig a hole in the roof of their cell and a rope of bedsheets to go over the wall. They were captured within three days, and a subsequent state investigation cited lax inmate supervision, poor tool control and incomplete cell searches.