Hillary Clinton Argues She Would Be a Political 'Outsider' 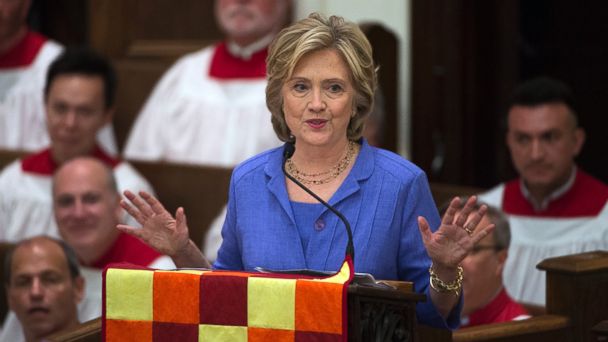 Hillary Clinton argued today that as president she would be as much a political outsider as any other candidate given that she would be the first female president.

"I cannot imagine anyone being more of an outsider than the first woman president, I mean really, let's think about it," the Democratic presidential candidate said during an interview on CBS News' "Face the Nation."

Clinton tweeted the remark, too.

"All these mothers and fathers bring me the place mats with all the presidents, and they bring their daughters and they say, 'My daughter has a question for you,'" the former senator and secretary of state explained Sunday. "And then the daughter says, 'How come there are no girls on this place mat?' So, I think that is a pretty big, unconventional choice."

When pressed further, Clinton acknowledged that "political outsiders" could refer to candidates who have never held public office. But, she argued, those people would not be as effective as she would be as president.

"I know what you're asking, 'Do we want people who have never been elected to anything, who have no political experience, who've never made any hard choices in the public arena?' Well, voters are going to have to decide that," she said.

Clinton's comments could be seen as a knock against Republican presidential candidates Donald Trump, Ben Carson and Carly Fiorina -- none of whom have ever been elected to public office, but are leading in the Republican polls.

Vermont Sen. Bernie Sanders, however, is also admired for being a political outsider by progressives. He is seeing massive support, gaining steadily in the polls, and even leading Clinton in New Hampshire.

During her interview today, Clinton also brushed aside the notion that she isn't authentic and doesn't show her "real" self out on the campaign trail.

"I can't possibly do that," Clinton said when asked to name three adjectives that describe her. "Look, I am a real person. With all the pluses and minuses that go along with it."