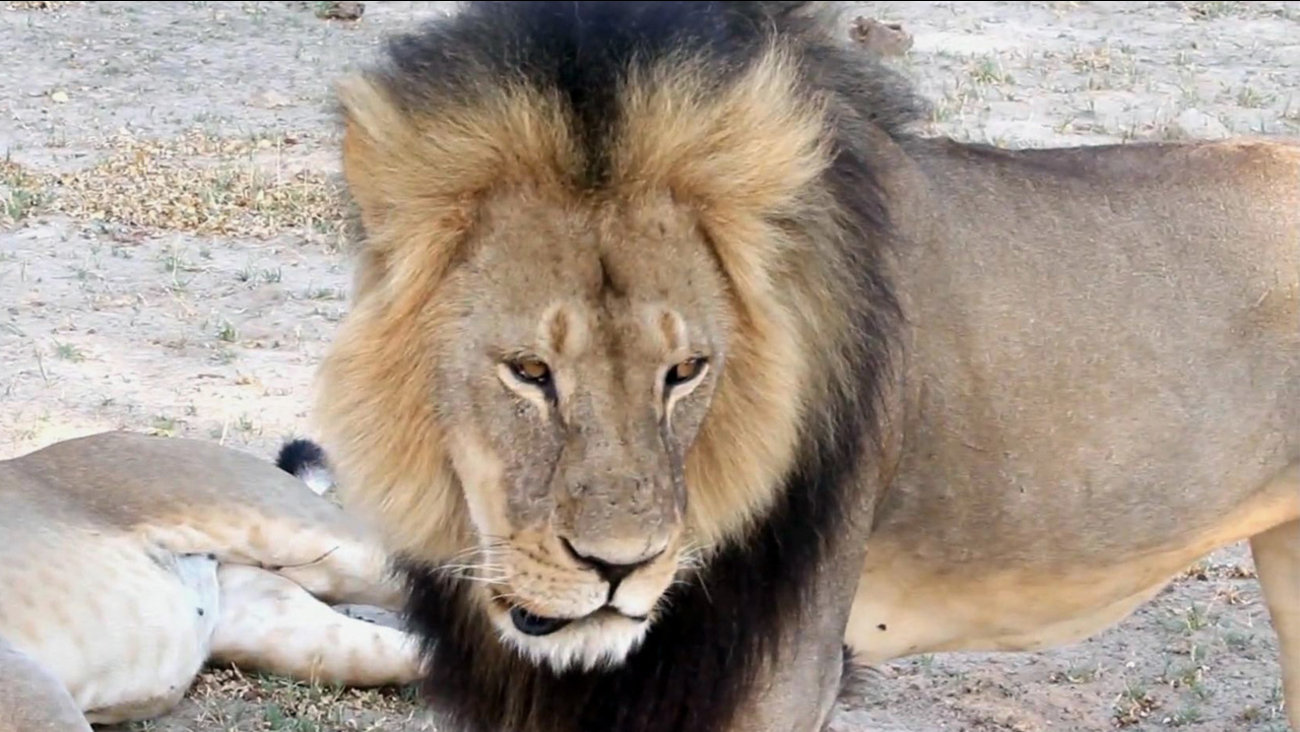 In this image taken from a November 2012 video, a well-known, protected lion known as Cecil strolls around in Hwange National Park, in Hwange, Zimbabwe. (Paula French via AP)

MINNEAPOLIS -- The Minnesota dentist whose killing of Cecil the lion fueled a global backlash emerged Sunday for an interview in which he disputed some accounts of the hunt, expressed agitation at the animosity directed at those close to him and said he would be back at work within days.

Walter Palmer, who has spent more than a month out of sight after becoming the target of protests and threats, intends to return to his suburban Minneapolis dental practice Tuesday. In an evening interview conducted jointly by The Associated Press and the Minneapolis Star Tribune that advisers said would be the only one granted, Palmer said again that he believes he acted legally and that he was stunned to find out his hunting party had killed one of Zimbabwe's treasured animals.

"If I had known this lion had a name and was important to the country or a study obviously I wouldn't have taken it," Palmer said. "Nobody in our hunting party knew before or after the name of this lion."

Cecil was a fixture in the vast Hwange National Park and had been fitted with a GPS collar as part of Oxford University lion research. Palmer said he shot the big cat with the black mane using an arrow from his compound bow outside the park's borders but it didn't die immediately. He disputed conservationist accounts that the wounded lion wandered for 40 hours and was finished off with a gun, saying it was tracked down the next day and killed with an arrow.

An avid sportsman, Palmer shut off several lines of inquiry about the hunt, including how much he paid for it or others he has undertaken. No videotaping or photographing of the interview was allowed. During the 25-minute interview, Palmer gazed intensely at his questioners, often fiddling with his hands and turning occasionally to an adviser, Joe Friedberg, to field questions about the fallout and his legal situation.

Some high-level Zimbabwean officials have called for Palmer's extradition, but no formal steps toward getting the dentist to return to Zimbabwe have been publicly disclosed. Friedberg, a Minneapolis attorney who said he is acting as an unpaid consultant to Palmer, said he has heard nothing from authorities about domestic or international investigations since early August.

Friedberg said he offered to have Palmer take questions from U.S. Fish and Wildlife Service authorities on the condition the session be recorded. He said he never heard back.

Ben Petok, a spokesman for U.S. Attorney Andy Luger, declined comment about conversations with Friedberg and referred questions to Fish and Wildlife. An agency spokeswoman didn't immediately return a call and an email Sunday evening.

After Palmer was named in late July as the hunter who killed Cecil, his Bloomington clinic and Eden Prairie home became protest sites, and a vacation property he owns in Florida was vandalized. Palmer has been vilified across social media, with some posts suggesting violence against him. He described himself as "heartbroken" for causing disruptions for staff at his clinic, which was shuttered for weeks until reopening in late August without him on the premises. And he said the ordeal has been especially hard on his wife and adult daughter, who both felt threatened.

"I don't understand that level of humanity to come after people not involved at all," Palmer said.

As for himself, he said he feels safe enough to return to work - "My staff and my patients support me and they want me back" - but declined to say where he's spent the last six weeks or describe security steps he has taken.

"I've been out of the public eye. That doesn't mean I'm in hiding," Palmer said. "I've been among people, family and friends. Location is really not that important."

Palmer, who has several big-game kills to his name, reportedly paid thousands of dollars for the guided hunt but wouldn't talk money.

Theo Bronkhorst, a professional hunter who helped Palmer, has been charged with "failure to prevent an illegal hunt." Honest Ndlovu, whose property is near the park in western Zimbabwe, faces a charge of allowing the lion hunt to occur on his farm without proper authority.

Asked whether he would return to Zimbabwe for future hunts, Palmer said, "I don't know about the future." He estimated he had been there four times and said, "Zimbabwe has been a wonderful country for me to hunt in, and I have always followed the laws."

In addition to the Cecil furor, Palmer pleaded guilty in 2008 to making false statements to the U.S. Fish and Wildlife Service about a black bear he fatally shot in western Wisconsin outside of the authorized hunting zone. He was given one year probation and fined nearly $3,000 as part of a plea agreement.