The 2020 NFL Draft: An important one for Giants and Jets 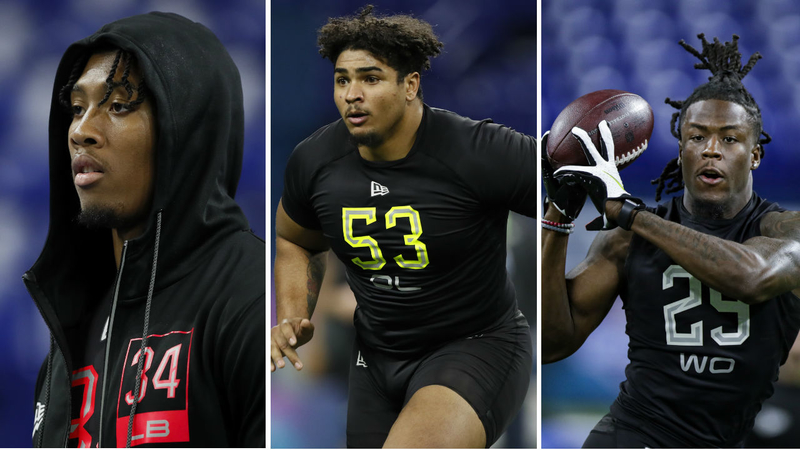 NEW YORK (WABC) -- The NFL Draft is finally here! No sentence has had a greater impact on sports fans as we get set to welcome our first major sporting event in more than a month. It promises to be seen by millions of fans across the globe.

A little closer to home, we are focusing our attention on the Giants and Jets, and rightfully so. The two teams combined to win just 11 games last season, making the next few days vitally important for the future of both franchises.

The Giants have 10 picks in the Draft, one in each round, including four 7th round selections. The Jets have only 8 picks, but it could be a case of quality over quantity as Gang Green has 4 of the first 79 picks, including the 11th selection in Round 1.

What is each teams focus over the 3-day event? Well the Giants need help at offensive tackle, safety and could use an edge rusher. The Jets need a left tackle, a wide receiver and an edge rusher as well. In other words, when you win a combined 11 games and have missed the playoffs the last several seasons, both teams need help and lots of it.

The good news? Both teams are set at two very valuable positions. Daniel Jones is the quarterback of the future and Saquon Barkley is already one of the best players in the NFL. The Jets have finally answered a decades-long question at quarterback in Sam Darnold, while Le'Veon Bell remains one of the best weapons out of the backfield in the league.

That being said, how will things play out Thursday night in Round 1? According to ESPN Draft guru Mel Kiper, the Giants will select Clemson linebacker/safety Isaiah Simmons.

"The Giants should take an offensive tackle with one of their first two picks, but I wouldn't pass on Simmons, who has rare athleticism and versatility," Kiper said. "Stick him at outside linebacker and let him chase down ball carriers, rush the passer and cover tight ends. Simmons never has to leave the field. New coach Joe Judge will love him."

Kiper also calls him the "safest pick" in the Draft.

The Giants will be tempted to take one of the many great tackles, including Iowa's Tristan Wirfs or Louisville's Mekhi Becton, but if I'm GM Dave Gettleman, I'm going with Simmons. Gettleman could also look to trade back for the first time ever as a GM, and that would be a smart play to pick up an extra pick or two, but Simmons may be just too good to pass up.

"I thought about Alabama wide receiver CeeDee Lamb here, but ultimately this class is much deeper with wide receivers than it is with offensive tackles," Kiper said. "And if the Jets can get a starting tackle with Wills and address the receiver position in Round 2 (No. 48), that's better than the inverse. They could get two immediate starters in the top 50 picks. According to my friends at ESPN Stats & Information, the Crimson Tide averaged 7.7 yards per rush outside the right tackle in 2019, which ranked third in the FBS. Wills would help get Le'Veon Bell going."

Wills would also provide some much-needed protection for Darnold, which makes this pick a win-win. If he's still on the board at 11, I'm taking Alabama wideout Jerry Jeudy. He had 26 touchdowns at Alabama and is a guy who Kiper says "is a superb route runner and smooth-hands catcher who is dynamic after the catch."

He would be just the type of playmaker the Jets offense needs, especially after losing top wideout Robby Anderson in free agency. If Jeudy is gone, I go offensive tackle with either Wills, Becton or Georgia's Andrew Thomas.

Sounds good on paper, right? Well the beauty of the NFL Draft is to expect the unexpected, so a flurry of trades or surprise picks could make Round 1 an eventful one. Either way, we are happy to report, we won't have to wait long to find out.