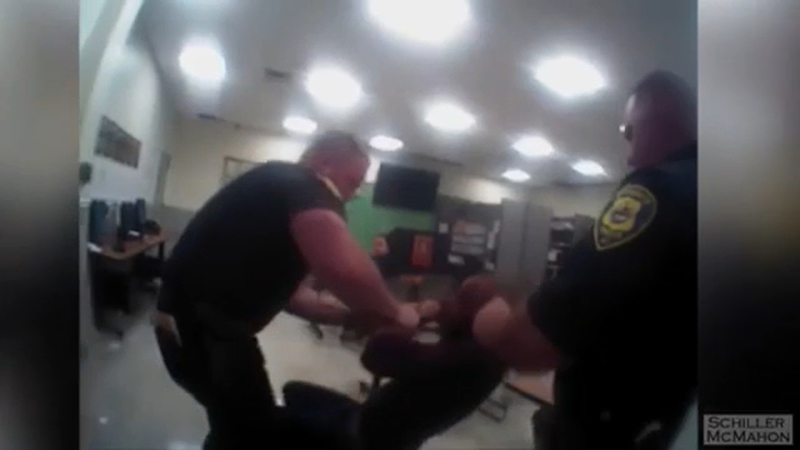 ELIZABETH, New Jersey (WABC) -- A police officer in Elizabeth, New Jersey is suspended without pay and facing the charge of simple assault after a man in custody was severely beaten.

The video, which has been edited by the victim's attorney, is violent and disturbing to watch.

Raul Tornes is seen in handcuffs being choked, beaten, and dragged inside the Elizabeth police department. The 27-year-old victim is claiming police brutality

"My eye was shut closed. My lip was swollen. I had blood all over me," he said.

Raul is a DJ. He says he had never been arrested before and had a good relationship with police. But last October, Elizabeth officers showed up at his home after his girlfriend called them over a dispute.

What happened next was a series of violent beatings caught on police body cams and surveillance cameras. There are other officers engaged, but no one seems to be stopping the attacks.

Tornes was handcuffed throughout and is heard screaming in pain.

"For him to do that with all of those cameras there is scary because it is indicative of a culture," said the victim's attorney Joshua McMahon.

The charges were quickly dropped against Tornes but it has taken almost a year for charges to be brought against Elizabeth Police Officer Edward Shields. A grand jury on Friday indicted him on one count of simple assault.

"A cop who is this dangerous, armed with a gun, making well over $100,000 a year in taxpayer money, this is not someone who should be on streets with people," said McMahon.

"I didn't think I was going to survive because of the abuse I was taking," said Tornes.

Raul's attorney says Officer Shields has 50 instances of using force while on the job.

The Union County Prosecutors Office released the following statement:
" The Union County Prosecutors Office takes allegations of misconduct or violence on the part of police officers extremely seriously as is reflected by the decision to twice present the matter to grand jury. We feel that the grand jury decision reached on Friday speaks for itself"