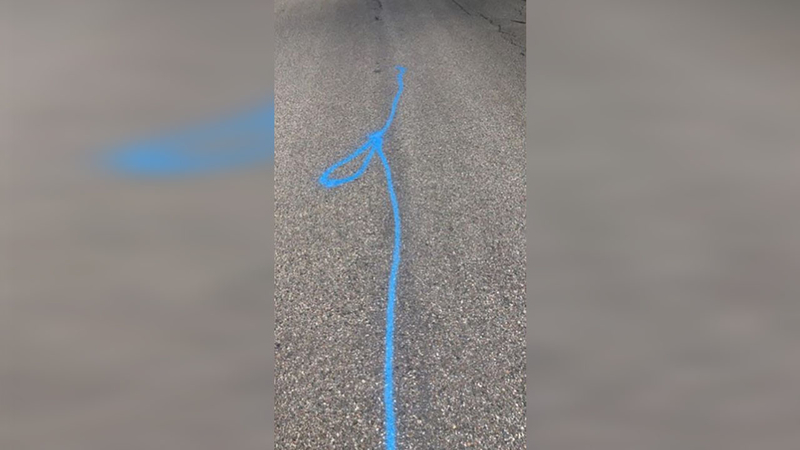 CHAPPAQUA, Westchester County (WABC) -- A noose was found painted on the ground in front of a Black family's home in Chappaqua, sparking a hate crime investigation.

New Castle police say the 200-foot noose was found painted on Cross Ridge Road around 3 p.m. Tuesday, in front of homeowner Linda Helm's house, where she has lived for 40 years.

"It doesn't anger me," she said. "It makes me sad that people are still feeling the same way about Black people."

They say the investigation determined the blue line was intentionally painted around midnight three days prior, by a slightly overweight white male in his late 30s or early 40s with straight brown hair wearing a polo shirt and shorts.

Helm said one of her neighbors witnessed some of what happened.

"She said a man came down the hill and she thought he was intoxicated," Helm said. "He came from down, came down, and stop here. And there was a noose thing, and they covered it in black to take out the loop part."

Town officials have since painted over the graffiti.

"Does he want me to move?" she said. "What does he want? What is he trying to prove?"

"My neighbors have been so nice, bringing cards, flowers, saying, hey, we are with you," she said.

The incident comes one week after a Black Lives Matter sign was set on fire in Chappaqua.

The investigation is active and ongoing, and anyone with information regarding this incident or anything similar is encouraged to contact the New Castle Police Department at (914) 238-4422.