Residents fed up with illegal cruising of dirt bikes, ATVs on NYC streets 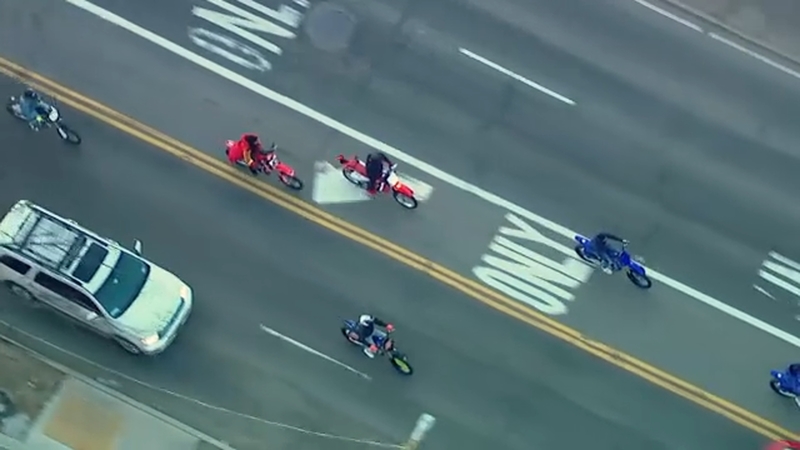 BEDFORD PARK, Bronx (WABC) -- Dirt bikers and four-wheel ATVs illegally cruising through the streets of Upper Manhattan and the Bronx are causing complaints from residents.

NewsCopter 7 caught the swarm of riders in an absolute free-for-all of wheelies along the Grand Concourse.

The reckless driving continued into a park at the entrance of the Mosholu Parkway where one biker left his mark on the moist grass.

"I see them doing a lot of dangerous stunts and it is very, very scary," resident Elizabeth Morales said. "That also creates other accidents."

A forecast of near 70 degrees on Thursday has people in the Bronx ready for what's to come -- another unwanted symphony of bikers disregarding traffic signals and riding on sidewalks.

"You know they're going to be out there," resident Angel Roberts said. "It's going to be like a parade. I'm serious, they go up...I mean it'll be something like a good 20 of them."

Police are certainly aware of what's going on.

Eyewitness News tagged along as NYPD aviation units monitored the dangerous driving from above, while officers on the ground corral the often unregistered street bikes.

Police also make it abundantly clear what happens to confiscated dirt bikes and quads: they meet their demise on the business end of a bulldozer.

Resident Vincent Amendola says the noise in the evening is an inconvenience for people who need to sleep and get up the next morning to go to work.