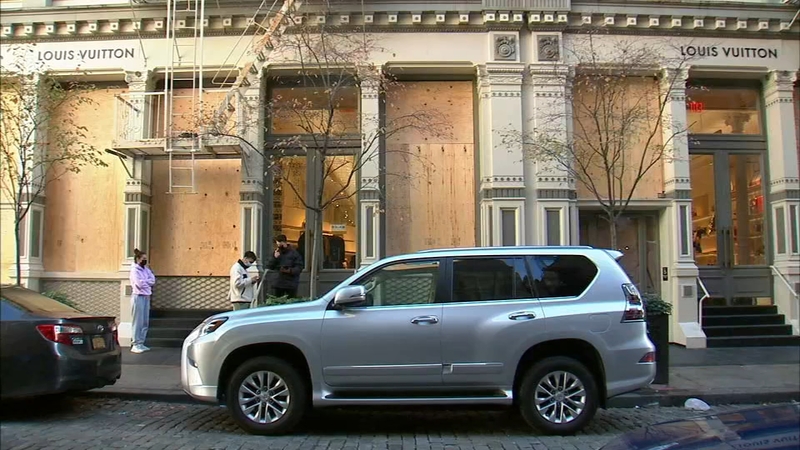 NYC businesses board up in preparation for Election Day

SOHO, Manhattan (WABC) -- Many businesses in New York City are boarding up their stores in preparation for potential mayhem as Election Day approaches.

The sounds of SoHo on Halloween, where the streets echo with whining power tools and the sheets of plywood on the windows make Tiffany look like a lemonade stand.

"It is very sad to see New York City in this kind of condition, with all these beautiful stores boarded up or closed down. It's very upsetting!" SoHo shopper Tina Sayah said.

The highest of SoHo's high-end stores are boarded-up, although many remained open.

Among them are Tiffany, Louis Vuitton and Dior.

The rioting this summer took many New Yorkers by surprise, in a city that had not seen widespread looting since the 1960s.

It's the ugly outgrowth of largely peaceful demonstrations that swept the nation after the death of George Floyd.

As the presidential election approaches, the NYPD presence will be stepped-up.

Police commanders have warned merchants, large and small, to take precautions, despite the absence of any specific threats.

To some shoppers, it's an overreaction.

Tensions have boiled over in a southwestern Washington city near Portland, Oregon, following a vigil for a Black man shot and killed by law enforcement.

"Like, what they saying by closing the stores, you know?" one shopper said. "It feels more like an overreaction to me."

The majority of stores we saw were not boarded-up, at least not yet.

Silas Waller works at one of them. Melissa, a shoe store on Broadway.

Some businesses may close early on Election Day. Others may not open at all.

The potential for unrest? No more predictable than the outcome of the election, itself.