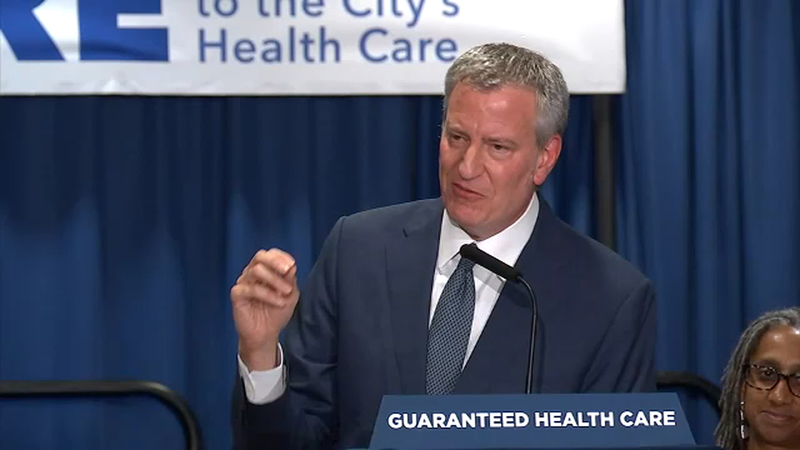 Mayor Bill de Blasio called the NYC Care card the key to quality and affordable health care for hundreds of thousands of New Yorkers who cannot afford or are ineligible for insurance.

The mayor also discussed his potential bid for president, saying his timetable remains to arrive at a decision sometime this month. He said reports that he would announce a decision this week were not true.

"All I said was the month of May, we never said a specific day," said de Blasio.

When the NYC Care card launches in the Bronx on August 1, residents will be able to use it to receive their own doctor, get preventative screenings and tests, and connect to a 24/7 service to help make appointments.

Health officials say an estimated 300,000 New Yorkers are currently ineligible for health insurance, including people who can't afford it or are undocumented immigrants, and will be able to enroll in NYC Care.

The $100 million program - one of two major components of the city's "Guaranteed Care" commitment - will be fully implemented across all five boroughs by the end of 2020.

"In New York City, we know health care is a human right, which is why we're making that right a reality," de Blasio said. "We're on track to guarantee health care for every single New Yorker. Access to quality and affordable health care is one of the biggest burdens working people face. Now they won't face it alone."

Mayor de Blasio announced a series of milestones toward implementing Guaranteed Care in NYC:
--New NYC Care Card, which will provide each member with a dedicated doctor, access to a 24/7 customer service line to make appointments, and clear copays that are affordable to each individual member.
--New NYC Health + Hospitals doctors hired in the Bronx to serve approximately 10,000 patients expected to enroll in NYC Care in the first six months.
--New Executive Director for NYC Care, Marielle Kress, who was instrumental in the Affordable Care Act's (ACA) successful expansion of Medicaid in states across the country.
--Access to 24/7 pharmacy services in the Bronx, launching on August 1, that will provide NYC Care members with easy access to affordable medication.
--GetGoveredNYC, the City's health insurance outreach and enrollment initiative, has enrolled more than 19,000 New Yorkers into coverage in 2019, a 19 percent increase from the same time period last year.